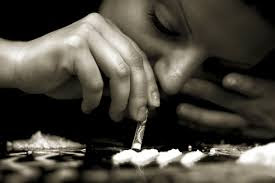 As British Columbia approaches the four-year anniversary of the public health emergency related to illicit drug overdoses, the BC Coroners Service and partners are renewing calls for improved access to a regulated, safer drug supply in the province.

“More than 5,000 lives have been lost in B.C. since 2016 as a result of illicit drug toxicity. These deaths have deeply hurt families and communities across our province and represent an immense loss of potential in all walks of life,” said Lisa Lapointe, B.C.’s chief coroner. 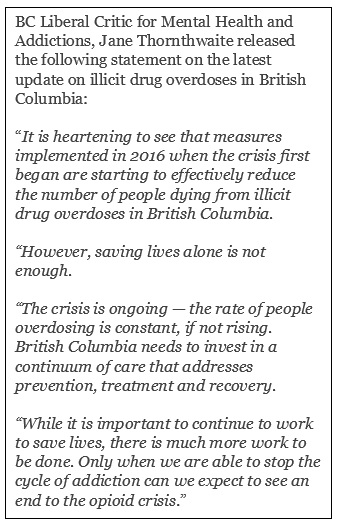 “The number of illicit drug toxicity deaths in 2019 remains higher than motor vehicle incidents, suicides and homicides combined, and B.C. continues to bear the heaviest toll of the impacts of the unpredictable, profit-driven, illicit drug market.

“Collectively, we continue to urge for greater access to safe supply for those in our community who are experiencing, and struggling to live with, substance use disorder.”

A continuing trend highlighted in the report is that middle-aged men are over-represented with more than three quarters of the suspected overdose deaths involving males and 71% involving people aged 30 to 59. Eighty-seven per cent of deaths continue to occur indoors, with more people dying on the days immediately following the issuance of income assistance payments than all other days in the year.

“The decrease in the number of British Columbians dying from this crisis is encouraging and indicates that our harm-reduction measures to keep people alive are working,” said Dr. Bonnie Henry, B.C.’s provincial health officer.

“We’re dealing with addiction. And addiction is an illness, a health condition. We are in no way out of this crisis yet. We continue to see very high rates of overdose events across the province and are seeing increased numbers of young people with long-lasting health effects after overdosing.

“The measures we are taking to ensure access to services are there for people who use drugs when they are ready and able to start their path to recovery. And in the meantime, we need to change our approach so that people who use drugs are able to seek help without the fear of being charged criminally and with access to a pharmaceutical alternative, instead of what is clearly a toxic street-drug supply.”

More than four in every five deaths in 2019 had fentanyl detected in postmortem testing.

"The effectiveness of the overdose response must be acknowledged, and our gratitude for the tireless work of those who are responding to overdoses when they occur cannot be overstated," said Dr. Perry Kendall, co-interim executive director at the BC Centre on Substance Use.

"We must also acknowledge that overdoses are still occurring at an equal or greater rate than ever as a result of the toxic drug supply, posing a significant public health threat that will impact a generation of British Columbians. An overdose can lead to long-term harms, such as traumatic brain injury that will last a lifetime. Lives are being saved, but saving lives alone is not nearly enough. We must now turn our attention toward implementing strategies to prevent overdoses from occurring in the first place — which must start with a legally regulated drug supply.”

Despite a decrease of illicit drug toxicity deaths over the past year, the number of non-fatal events plateaued in 2019, according to data from BC Emergency Health Services.

Aboriginal British Columbians continue to be over-represented in the data proportionally – and following further review by the First Nations Health Authority, an Aboriginal-focused report will be published with more detailed data and analysis.

“We can confirm we will be releasing our own data in partnership with the BC Coroners Service on the specific impact of this crisis on First Nations people in B.C. in the coming weeks,” said Dr. Nel Wieman, senior medical officer, mental health and wellness with the First Nations Health Authority.

“But we know one thing for certain: the impact of this crisis on Indigenous peoples is proportionately greater than for the rest of the population.”