I believe there is much they have done to weaken our province HOWEVER, this was an outrageous act that should be condoned by no right thinking individual 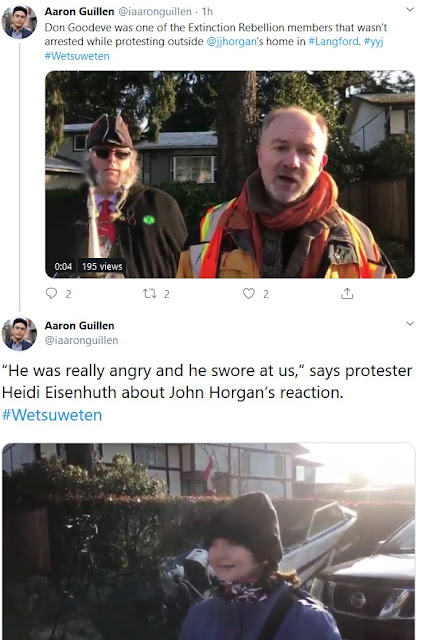 This morning a group of what I will call troublemakers, hooligans, lawbreakers, and thugs, decided that the home of Premier John Horgan was the place to hold a protest and blockade ...

... a media circus if you will ... where they were going to serve a citizens arrest on the Premier.

Now all of you, I am sure, know I am no fan of the BC NDP government; I believe there is much they have done to weaken our province HOWEVER, this was an  outrageous act that should be condoned by no right thinking individual.

It was perpetrated by bullies attempting to force their way on the rest of us -- in a new escalation of their efforts -- due to the minimal support, from the general public, for their on-going illegal protests and blockades.

This must end – it has to stop – because it has gone on for far to long.

This morning in an editorial by Mel Rothenburger, The Armchair Mayor, he stated that:

Clearly, the current protests — at least the ones that ignore court orders and interfere with transportation — can’t be allowed to continue for long. The economic and social health of the country is being eroded and if blockades continue, they’ll beget more blockades.

At some point, politicians and the courts will to have to put their feet down and police will have to “move in” with force. Obviously, they must do it with care and respect, and avoid physical confrontation.

Mel, at least in my opinion, was certainly correct in his observation that, “... the current protests — at least the ones that ignore court orders and interfere with transportation — can’t be allowed to continue for long.”

So, let me ask, if at least some of these protests and blockades are ‘ignoring court orders’ why should that be allowed at all — never mind be allowed to continue for ANY length of time?

What started out as a centralized protest, has grown larger and larger, and seen organizers getting more and more brazen in flouting the law. 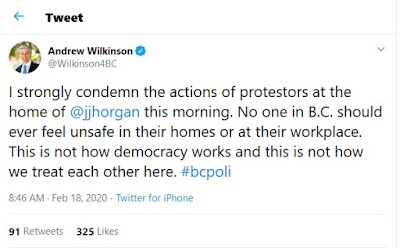 It’s human nature to push and see where the boundaries are.

Up to this point however, Justin Trudeau and the federal government, and even our provincial government — through their wringing of hands and saying all we need to do is talk and find common ground — have simply told protesters there are no boundaries – at least none that they are willing to enforce.

Which is why it was disappointing, but not unexpected, that the personal home of our premier – and his wife – would be violated as it was this morning. It also led the Liberal Opposition leader, Andrew Wilkinson to condemn the, as he stated, “No one in BC should ever feel unsafe in their homes, or at their workplace”.

With Premier Horgan unloading in non-premier-like language, on these individuals today, perhaps at least a boundary has finally been found for him, and which will finally be the impetus for action.

One can only hope!