From an armchair discussion, to a roundtable ... our Prime Minister certainly leads an exiting life 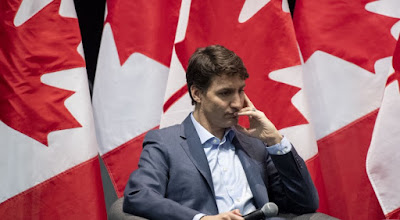 THIS JUST IN ... (mix in the sounds and effects of clattering typewriters)

Tomorrow morning at 9:45am, according to the Prime Ministers Office, Justin Trudeau will participate in an armchair discussion with representatives of SheEO ventures.

Also attending this armchair discussion will be the Minister of Small Business, Export Promotion and International Trade Mary Ng.

I’m guess that an armchair discussion is pretty loose -- kind of like sitting around the kitchen table, having a few beers, and sorting out the ills of the world.

This event will be Open Coverage, rather than just for those designed as “Accredited”

Here’s what I truly found interesting though. The armchair discussion, as I’ll remind you, gets underway at 9:45am.  So what time is the media supposed to arrive?

According to the Notes for The Media, they must arrive no later than 8:15am.

That’s ONE HOUR AND THIRTY MINUTES before the event takes place.  Hell, I’m pretty sure people can arrive to get checked through security at the Kamloops Airport, for a flight to Vancouver, needing less time than that.

And if that makes little sense, there’s a FOLLOW-UP EVENT, to the armchair discussion

At 11:15am the Prime Minister will participate in a roundtable with representatives of the very same SheEO ventures. And once again, Minister of Small Business, Export Promotion and International Trade, Mary Ng, will be in attendance.

This one is open to the media as well.

From an armchair discussion ... to a roundtable ... our Prime Minister certainly leads an exiting life now that he has passed on a lot of the important Prime Ministerial duties to Deputy Prime Minister Chrystia Freeland.

Or am I wrong ... and missing something??