This has been a highly unusual time in Ottawa. Last week the leader of the Bloc Quebecois threatened the Trudeau Liberal government. What was the threat?

That the Bloc would not support resuming regular in-person sittings of the House of Commons unless Prime Minister Justin Trudeau agreed to a number of Bloc demands.

Not to be outdone, the NDP also used the threat of returning to regular Parliament as a bargaining chip against Prime Minister Trudeau. In the case of the NDP, they offered to support continuing the suspension of Parliament in exchange for the Liberal Government attempting to implement mandatory paid sick leave for employees.

As you may have heard, the Trudeau Liberal Government, desperately not wanting regular sittings of Parliament to resume, accepted the NDP terms and are currently having discussions with the provinces and territories.

The reason why there are discussions, or more likely negotiations, is because, with the exception of federally regulated workplaces, the vast majority of Canadian workers full under provincial labour legislation.

It is deeply troubling that both the Bloc and the NDP used the resumption of regular sittings of Parliament as a bargaining chip against Prime Minister Trudeau.

While the NDP are claiming a victory for their efforts to derail regular sittings of Parliament in return for a commitment for mandatory paid sick leave, there is an inconvenient truth that the NDP is avoiding. Had regular sessions of Parliament resumed, the NDP could have introduced mandatory sick leave as an opposition day motion, where it could be properly discussed and debated on the floor of the House of Commons. 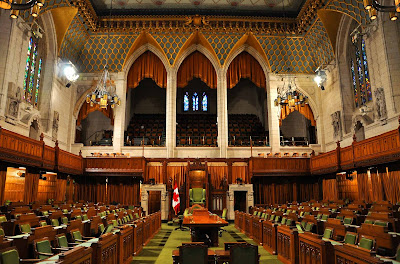 All of this will be in effect until September 21st of this year, where the same political bargaining situation could resume.

Let's be honest, this was not a health and safety related deal between the NDP Opposition and the Liberal Government. MP's will continue to sit in Ottawa, in person, four days a week from now until June.

The difference is, that instead of sitting in regular Parliament for those four days, MP's will instead continue to sit as part of the special COVID-19 committee.

As mentioned previously, the special COVID-19 committee meetings have limitations for opposition parties as well as for individual Members of Parliament.

I will state publicly that I am deeply disappointed in the NDP, who have denied the Official Opposition from being able to fully hold this Liberal government to account. The job that voters sent us to do, to raise concerns on their behalf in Ottawa, is now seriously limited.

If the NDP did not want to do the job voters elected them to do, they could have remained at home in their ridings and allowed the Official Opposition to hold the Government to account. Instead they cut a deal that diminishes our role to hold the government accountable during a critical time in Canadian history.

My Question This Week:  “What are your thoughts on this?”

Dan Albas ... the Conservative Member of Parliament for the riding of Central Okanagan – Similkameen – Nicola ... is currently the Shadow Minister for Employment, Workforce Development & Disability Inclusion.