PECKFORD -- And now another $850 million to international organizations — for research. What Organizations? Oh, we do not know

Another $850 million out the Door — and out of Canada! 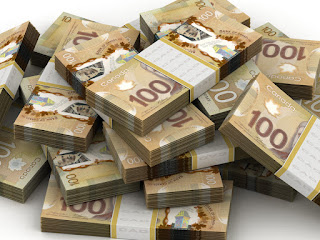 Do you get the idea that we have some mysterious pit of unlimited supply of money?

Do you get the idea that our Federal Government forgets that 5 million Canadians do not have a family doctor ... that our wait times for surgery are among the most in the Organisation for Economic Co-operation and Development (OECD) ... and that the time of getting an appointment with a specialist is one the highest in the OECD?

Do you remember the Paris Environmental Conference? That’s the one where we fell all over ourselves committing your money -- in the hundreds of millions of dollars -- to an agreement that is scientifically questionable and voluntary, and excludes India and China ... the two most populous nations on earth?

And now another $850 million to international organizations — for research.

What Organizations? Oh! We do not know.

The CTV report says: ‘The funding will be provided to several global health organizations.’

Thanks —-$850 million, and all we get from one of our leading news organizations is that the money is going to ‘several global health organizations’.

And this news report also says:

‘This (recent past funding) has included funding to Canadian life sciences companies and to the World Health Organization’s (WHO) treatment trials, as well as creating “strategies to tackle misinformation, stigma, and fear,” according to a government statement.’

What does that mean?

We are still sending money to the WHO even though their legitimacy is in question? And we may be funding disinformation campaigns against who exactly?

Whose side are we on anyway?

Our largest trading partner, without whom we would be in economic / financial trouble big time, and who we would have to depend on in an armed conflict ... or an undemocratic Communist state, that makes people disappear and who are trying to hide the origin of the Wuhan virus?

What is going on in this country? And we still are trying to decide if we will adopt 5G from China?

This just does not add up!

Is someone going to sound the alarm?

In 1972 Brian Peckford was first elected, as a Progressive Conservative, to the Newfoundland Labrador House of Assembly. He became Premier at the age of 36, and held the leadership of his party and government from 1979 to 1989.

He and his wife Carol have made British Columbia their home, since 1993. They now live in Parksville, on Vancouver Island. He blogs at Peckford 42.