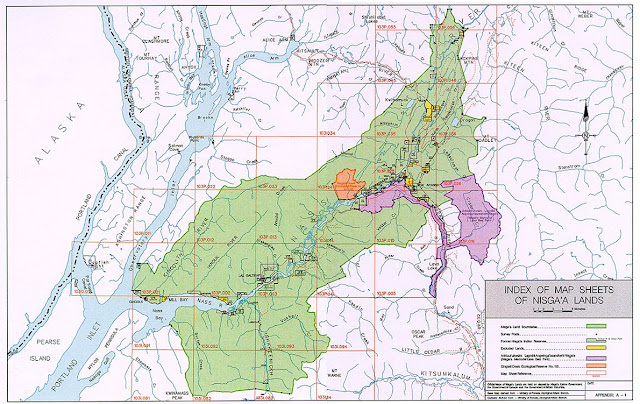 “On this special milestone day, may we remember the generations of Nisg̱a’a men and women who worked tirelessly over 113 years for the just and honourable settlement we achieved on May 11, 2000. May we continue to work steadfastly for the prosperity and improved quality of life of Nisg̱a’a for generations yet to come.”

For the Nisg̱a’a people, May 11, 2000, marked the end of a 113-year journey and the first steps toward a brighter future. The Nisg̱a’a Final Agreement is the first treaty in British Columbia to provide constitutional certainty in respect of an Indigenous people’s Section 35 right to self-government.

The Treaty recognizes Nisga’a Lands (2,000 square kilometres), secures Nisg̱a’a hunting and fishing rights in the Nass Wildlife Area and Nass Area respectively, and has opened the door for joint economic initiatives in the responsible, sustainable development of the Nisg̱a’a Nation’s natural resources — benefiting the Nisg̱a’a, as well as their fellow British Columbians and Canadians.

“Twenty years is a significant milestone. An entire generation of Nisg̱a’a young people have grown up as members of a self-governing treaty nation. Unfortunately, the COVID-19 pandemic means we can’t be together to recognize this special day for the Nisga’a community and the Province, but in honour of Nisg̱a’a Day and the government-to-government relationship we’ve built together over two decades, the Nisga’a flag is flying in the Hall of Honour at the B.C. Parliament Buildings. I thank the Nisg̱a’a Lisims Government for its leadership and congratulate all Nisga’a people on this anniversary.”

An example of hope, trust and co-operation, the Nisg̱a’a Final Agreement is being studied by governments and Indigenous peoples the world over.

Today, the Nisg̱a’a Nation includes more than 7,600 people residing primarily in the Nisga’a villages of Gingolx, Laxgalts’ap, Gitwinksihlkw and Gitlaxt’aamiks (formerly New Aiyansh) on British Columbia’s northwest coast, as well as in Terrace, Prince Rupert/Port Edward and throughout the Lower Mainland.

“Two decades ago, the Nisg̱a’a people charted a new path on their journey of self-governance. At the same time, B.C. and Nisg̱a’a reset our relationship to focus on reconciliation, supporting an even-better life for Nisga’a communities and people. I congratulate the Nisg̱a’a leadership on the social, cultural and economic successes of the past 20 years, and look forward to the good work we will do together in the future.”

With the land question settled and their rights secure, the Nisg̱a’a have been busy building their government and institutions, as well as facilitating development, including BC Hydro’s 335-kilometre, 287-kilovolt Northwest Transmission Line; the Long Lake Hydroelectric Project, a 31-megawatt power generation facility; and the Brucejack Mine, an underground gold and silver mine operated by Pretium Resources Inc.

Each of these projects has generated employment, business opportunities and revenue.

While the 20th anniversary gathering has been postponed due to the COVID-19 crisis, the governments of Canada, British Columbia and the Nisg̱a’a Nation — partners in the Treaty — seek to remind the world of what can be achieved together.