FORSETH -- It was all the stuff you’d expect to hear from the candidates – and which honestly didn’t really move me much emotionally. Maybe that’s good! 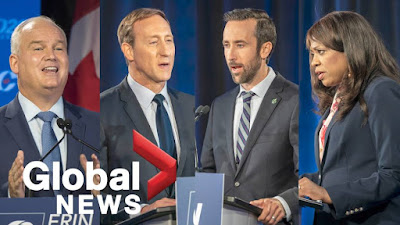 Yesterday afternoon I finally had a chance to watch the Conservative Party English debate. No change in Derek Sloan not being a choice for me.

The big change however is that Peter MacKay has dropped to #3 on my ballot, while Leslyn Lewis has moved to #2, and even making me re-thing my #1 choice. I appreciated her frank answers to questions, and while not as polished as O'Toole and MacKay, I appreciated what she had to say.

What was the worst part of the debate?? When the young boy (Max? Matt?) asked the leadership contenders to answer why the wanted to be the next Prime Minister?

All four went straight to an adult answer, that I'm sure he had no clue about.  Blah blah blah about taxes ... foreign policy ... jobs. They pandered to him, while giving an election campaign style response.

This was a kid that probably plays baseball (at least until the COVID-19 pandemic) ... rode his bike ... maybe played hockey ... and likely played video games).

Was he at all interested in the answer he received?  Not likely.

Given the Liberal government of Justin Trudeau canceled the Children’s Fitness Tax Credit, perhaps asking if he is still about to enjoy recreational activities and play organized sports. Relating their own childhood experiences, and that they want him and his friends to be able to continue to enjoy that.

Asking if young Max gets an allowance ... and is he learning the importance of saving for that new Play Station or Xbox system, or game?  Relating that to the importance of being able to have a piggy bank for the important things’ government is responsible for.

Relating a story perhaps, from their youth, about someone who made a huge positive impression on them -- what that meant to them -- and how it made them want to be like that as an adult – and how that impacted their decision for public service.

At least on candidate (can’t recall which one) said something about creating an environment (or something like that) so that he might have the opportunity to become Prime Minister some day.

Why?  What reason did they give Max to think about doing that? Anyway, enough about that – for now ... maybe another day I’ll come back to it.

As for O’Toole taking shots at MacKay? O’Toole took a few well-placed ones --- not unexpected – however they were for the most part pretty tame.

The expected foreign affairs issue with our trading partners and allies ... free trade ... the UN, and in particular the World Health Organization (WHO) ... Canadian security around the necessities of life, and health protection items ... who was more patriotic around or armed forces (I loved MacKay’s comment about flying in a Sea King helicopter, and an unspoken reference to their safety) ... health ... jobs ... racism and do we have some racism, or do we have systemic racism, in Canadian organizations.

Sloan, as expected, hit more strongly on social issues – and Lewis was softer on that, saying that there is room in the tent for all. MacKay and O’Toole also echoed that, however to me the genuineness didn’t feel as sincere.

It was all the stuff you’d expect to hear from the candidates – and which honestly didn’t really move me much emotionally.

Maybe that’s good, because I thinks that to much decision making around governance is based on who has made us feel good, rather than perhaps what might hurt a bit because that’s what’s needed for our future well-being, that of our children, as well as friends, family, and neighbours.

The order of my ballot choices aren’t firmly locked in yet, so I still have a big decision ahead of me ... and I wonder how many others are in the same position?

I’ll wish you success as you make your own determination.  It’s an important one as ultimately your choice is who may become our next Prime Minister.

What answer(s) have they given you as to why they should be your #1 choice.