PECKFORD -- As China Passes Laws to Further Restrict Hong Kong ... we cozy up with them on the Wuhan Virus vaccine

I referenced this some weeks ago that Dalhousie University was teaming up with China on the development of a Wuhan virus vaccine. No one seems to care that much that we are still involved with the Chinese over things on which we still have control. 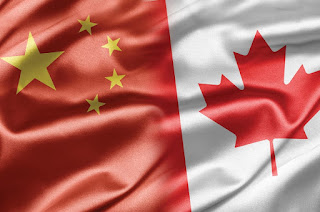 I mean how do you square that with the fact that the Government expresses its concern over the two Canadians still being held in jails in China on fabricated charges. Are we really being consistent here?

And now we hear of a new law by Chinese authorities that will further hamper Hong Kong’s freedom.

So, while we pretend support for our imprisoned Canadians, we continue expanding our involvement with China.

How about scholarships to a Canadian university for Chinese students. There is a $20,000 one at the University of Victoria for students from the East China Normal University, for example -- and bursaries for Chinese Students. Here is a direct quote from the University’s website:

‘A number of awards, which may vary annually, are available to students from the People’s Republic of China.’

Now before I am accused of racism let me say that under normal circumstances this would be wonderful —the cultural exchange etc. is what a university is about.

But when that country imprisons or makes disappear people who disagree with them ... isolates and discriminates their minorities ... restricts speech and freedom of the press ... has one party rule ... violates an agreement on Hong Kong ... broke international law in the South China Sea according to the International Court ... and then has a virus break out that they contain by disallowing travel within their own borders but simultaneously allows travel internationally ... then, I have a problem.

And apparently a fair amount of Chinese technology is already in our communications companies like Telus.

This is where the rubber hits the road.

Thankfully there was an extradition treaty with the United States regarding the Huawei executive (Meng Wanzhou) or who knows what would have happened?

So, are Canadians just seeing a game being played where ostensibly we are standing up the Chinese but in reality ——we are not?