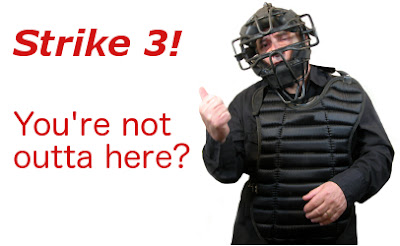 First, it was losing (to two smaller nations) the competition to gain a temporary seat on the corrupt United Nations Security Council and now a couple of days later we see the two Canadians being held by China, being formally charged.

Any day strike three. And in baseball terms he should be .... out.

Oh, if we were only that lucky.

Everyone knows its all about China exerting pressure on Canada for having the gall to follow the law and allow extradition changes to proceed against the Chinese Company official.

For Trudeau and his advisers to think that by appeasing China over the last few years that this would make a difference in how China would view us, is the idea of a child playing a man’s game.

"What have we achieved so far with this appeasement strategy? I'd argue nothing," Saint-Jacques said.

Canada must now take an aggressive approach to its dealing with China, he said. Wow, finally some sanity. Too bad its a ‘former’ Ambassador.

As I have been saying since Trudeau was elected, this man is pro China, his Daddy was pro China.

Everyone wants to forget that this man praised China’s system.

What do we have when this man tried to evade from even saying the word Taiwan? When we have a public health officer who is pro World Health Organization (on a panel of the WHO), and hence pro China. A man who mocks the President of our largest trading partner and historic ally?

Who did we have to count on to get our crashed helicopter off the bottom of the Mediterranean Sea a few weeks ago? Was it China? No, it was the Americans, and did I hear any thanks from Canada?

Canadians have a few blind spots.

One ... is that we have this fantastic health care system while 5 million Canadians (Statistics Canada, 4.2 million in 2014) have no family physician, and we are near the bottom of the list ( Commonwealth Fund Study) of advanced countries in the number of physicians, wait times, seeing a doctor, and seeing a specialist.

Second ... somehow the name Trudeau excuses all kinds of mistakes both domestically and internationally.

Now, will we get realistic about China?


Brian Peckford was elected in 1972, as a Progressive Conservative, to the Newfoundland Labrador House of Assembly. He became Premier at the age of 36, and held the leadership of his party and government from 1979 to 1989.

In 1993, he and his wife Carol moved to British Columbia and they now live in Parksville, on Vancouver Island.  He blogs at Peckford 42.