UPDATE --- I have been just advised as to why there is a  discrepancy in polling results, noted in my original post from this morning:

" ... the official poll cited by Chuck Strahl is the one taken by Zoom after the debate, so that poll is of the people who actually watched it.

So much as I love Dr. Lewis, the article you linked to is fake news, and Chuck Strahl is not a liar. He is citing the more accurate poll ..."

STILL ... it is a shame that there was not clarity provided as to when and how the pol was taken and conducted ... Alan

WHY IS CHUCK STRAHL, a supporter of Erin O'Toole in the campaign to become leader of the Conservative Party of Canada, misleading members of the party?

This morning I received an email from him, sent out by the O'Toole campaign. In the email Strahl

indicated that prior to the BC EDA debate on Tuesday, that Erin and Leslyn were tied at 33% support amongst viewers.

HOWEVER ... he then claimed that after the debate, support had changed with viewers giving O'Toole 37% support compared to 26% support for Dr, Leslyn Lewis (see attached screen shot from the email I received at 8:22am this morning). 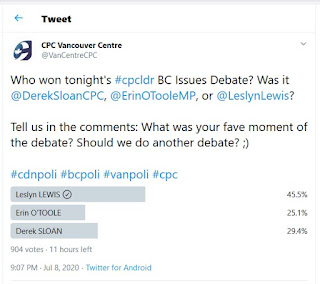 THAT IS NOT TRUE as you can see in the screenshot image of a Tweet by the Vancouver Centre EDA. It show that Leslyn Lewis was clearly the winner coming out with 45.5% of debate viewers indicating she had won.

Even Tweets by Vivian Krause and one by the Post Millennial had Leslyn Lewis winning the debate. 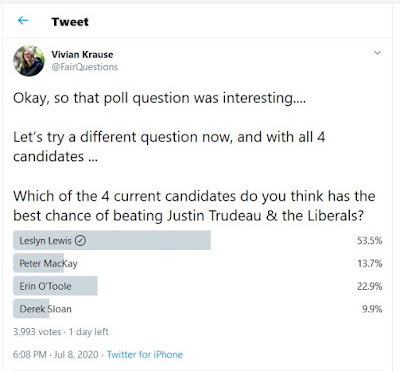 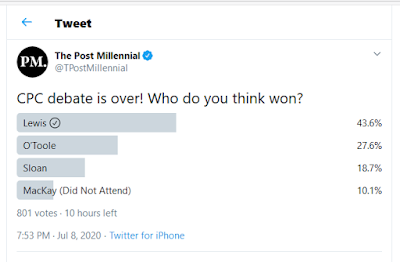