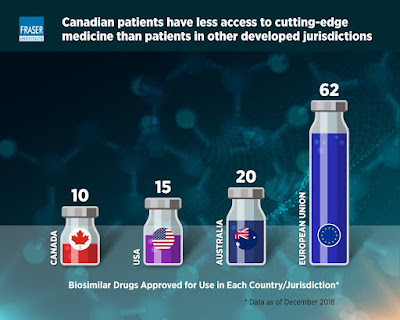 According to the study, as of December 2018 (the latest month of comparable data), Canada has approved only 10 “biosimilars,” which are versions of biologic drugs, compared to 15 in the United States, 20 in Australia and 62 in the European Union.

Biologic drugs are produced from (or contain elements of) living organisms. They are more complicated—and more expensive—to develop, produce, distribute and dispense than other medicines.

Subsequently, the ability of drug companies to protect their intellectual property—for example, through data exclusivity, which essentially prevents competing firms from producing generic versions of the drugs for a period of time—is essential for incentivizing the development of biologics, particularly because biopharmaceutical innovations are easily copied and sold by competitors.

Unfortunately, Canada’s current intellectual property laws are weak compared to laws in other jurisdictions including the U.S. and EU. For example, Canada has one of the shortest terms of data exclusivity for pre-clinical and clinical trials.

“If Canadian policymakers want to improve access to state-of-the-art drugs in Canada, they must strengthen protections for intellectual property,” Acri said.