PART THREE: Getting to know Trevor – leader of the Conservative Party of BC

The following, is the third in series of commentaries, introducing British Columbians to Conservative Party leader Trevor Bolin ... 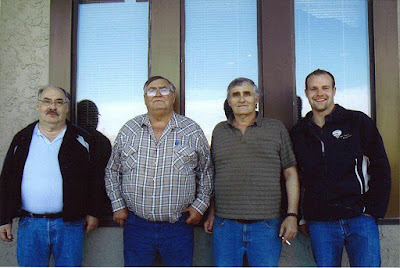 Question - Last year during an interview in Vancouver, you briefly touched on BC’s fight against drugs, can you tell us where your knowledge and passion comes from?

Trevor - We didn’t know it at the time, but this picture would be the last one of me and my Dad (second from the right).  He struggled with addictions for over 20 years, and due to complications from long term illegal narcotics, ultimately lost his life.  This battle that he lived everyday; I chose to share with him.


Question - You have been quoted as saying “working with my Dad in battling his addictions, was a harder lesson in life than a university degree”, can you explain?

Trevor - People who have had addictions in their immediate families, whether parents, kids, siblings or other family members have one of the hardest choices’ life can give us: fight or flight.  The decision for those not affected, sounds like it could be an easy one to make, but trust me ... it’s not.

When you choose to fight alongside them, you are in the trenches and sharing that battle day in and out, every hard time, every slip, and hopefully every celebration of a new day.


Question - How do you feel the current Government and previous Government did in taking on British Columbia’s illegal narcotics issue?

Trevor - Considering the unprecedented rise in overdoses, fatalities and continued growth in users ... not very well.

The Government must work with The Provincial Health Authority, Not for Profits that specialize in addictions and Communities across the Province to get a strong hold on programs that can reverse the deadly affects of addictions.  They need to stop treating the addiction solely, and start treating the person.


Question - You mentioned your Father ultimately died from complications due to his battle with addictions.  If you could go back, what have you learned since that may help?

Trevor - I have continued, for almost a decade since his death, researching what I could have and should have done.  I feel the price he paid cannot be in vain, and its purpose is to help me help others.

Over 33% of recovered addicts contribute the start of narcotics to a form of depression.

Over 25% of addicts currently in treatment are also working on the treatment of a mental illness.  Drugs and those that deal them, prey on the weak, the depressed, the sad, and the ones who feel the most broken.

We can and will make a difference, if we are committed to doing it together.


Question - What can we do? What advice can you offer to those going through something similar?

Trevor - We as a society, as sons and daughters, fathers and mothers, need to recognize the early signs of depression and mental disorders on order to help assist our loved ones.

We need to be aware of the risks in our communities, and be firm that we won’t put up with them preying on our family and community members any longer.  We need to ensure health authorities across this province are treating the patient at the root cause of their addiction.  We need to ensure the Government hears us as we speak loudly for those that cannot speak for themselves.


Question - What is the Conservative Party of BC working on to ensure we see a reverse in the numbers of fatal overdoses?

Trevor - As leader of the Conservative Party, here in BC, I am in the midst of forming a committee that I will work with in order to facilitate a community-based approach to handing the devastation we are seeing families hit with when it comes to illegal narcotics.

We can and we will as one put a stop to overdoses, the pain families are going through, and those in our society who decide to prey on our most vulnerable... and we will put them behind bars where they belong.


Join us today, in the fight for a better tomorrow!