STEPHEN WOODWORTH -- Who Should I Vote For? 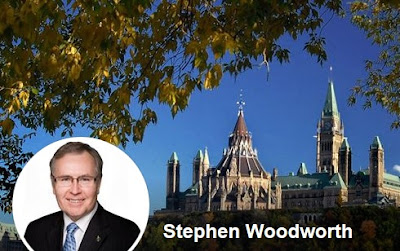 I endorse both Leslyn Lewis and Derek Sloan (who I mention in this order simply alphabetically, without suggesting a preference) for the position of Leader of the Conservative Party of Canada!

Derek Sloan and Leslyn Lewis each possess the character and the skills needed to guide our team of candidates to victory. More importantly, Leslyn and Derek have each offered a suite of policies which, if implemented, will pull Canada back from the brink of the terrible precipice to which we have been brought in recent years.

Good government is not about imposing our views upon an unwilling population.

It’s also not about swaying in the breeze of every passing twitter storm! Good government means the middle path of firm and confident advocacy for measures designed to benefit all Canadians, advocacy which builds consensus! Derek and Leslyn each have the determination and the sensitivity to achieve that level of leadership.

Democratic leadership is not about dictating “my way or the highway.”

It’s also not about meekly standing by while policy is hijacked for the benefit of a few at the expense of the many! Democratic leadership means the balance to ensure ordinary people, Party members and the electorate alike, are fully informed about policy choices, through thorough debate, and then accepting the wisdom of those grassroots decision-makers, even when we might not fully agree. Leslyn and Derek each have a deep and abiding confidence in democratic process.

Most importantly, for me, both Derek and Leslyn embrace the fundamentally important legal principle which recognizes the inherent dignity and equal and inalienable rights of every member of the human family. No one who votes to sustain a law which falsely denies the humanity of any human being, as one of the other two leadership candidates has done, can claim that distinction!

I hope you won’t fall into the trap of demanding perfection of any candidate.

There’s plenty of room for reasonable, like-minded, people to disagree on the details and still support one another! If you and I want a Leader who agrees with you and me about everything, one of us had better run for the Leadership ourselves!

Some policies are truly beyond the pale, but none of Derek’s or Leslyn’s policies falls into that category.

In fact, the only policy I’ve seen expressed in this Leadership contest which I find utterly insupportable is a policy which insults, condemns, and suppresses, the peaceful personal values of any Canadian, from Andrew Scheer down to the least of us!

In the happy case where one or the other finds themselves contending in the final ballot, their relative support will not depend upon anyone’s endorsement but on their own merits as found by our members.

Leadership contests inevitably, but unfortunately, involve contrasting the merits of one candidate against the flaws of another. Endorsing any one candidate inescapably constitutes a judgement on the others. If no sufficient purpose is served, I won’t do that. In this case, I’d be pleased to see either Derek Sloan or Leslyn Lewis elected as Leader of the Conservative Party of Canada.

I won’t ask you to prefer one over the other. I’ll leave that to your judgement.

But please put both Leslyn Lewis and Derek Sloan at the top of your ballot! For the sake of Party unity and grassroots democracy!

For the sake of sound policy based on principles of justice and human rights!

For the sake of a Canada where the first priority of government is the welfare of every Canadian!

Stephen Woodworth ... was Member of Parliament for Kitchener Centre (Conservative) from 2008 to 2015, after having practised law in his riding for almost 30 years.

He studied Political Science at Wilfrid Laurier University for 2 years, followed by attaining his Bachelor of Laws from the University of Western Ontario. He served in local government as a School Trustee from 1994 to 2003. He is a lifelong community volunteer and political activist, and the Executive Director of The Democracy Defence Initiative.

He and his wife of 44 year, Sharon (a retired Ontario Justice of the Peace), have 3 children and 7 grand-children.