THE SIDEWINDER – What is a Conservative"

I have always considered myself a conservative person -- both socially and politically -- but this is by my own definition which will almost certainly clash with other people's views of conservatism.

In my view, a conservative approach to social issues must be inclusive and reflect a strong social conscience.

“In my opinion, a truly conservative approach to change simply
means making sure the change is going to enhance life in our
democracy for everyone and is not based on purely partisan views”

It has always annoyed me that the NDP and its predecessor, the Co-operative Commonwealth Federation (CCF), portray themselves as the only political party with social conscience, something that is remarkably inaccurate and misleading.

It is in the nature of being conservative that we must consider the well being of everyone living on this planet.

For most of my adult life I have been a member of the Progressive Conservative Party of Canada. At one time, I quit the party for several years because too many elected members forgot what being a conservative really means.

Since then, the leadership of the Conservative Party of Canada has largely returned to its basic roots.

Now that I have stated my definition of what I consider being a conservative means, I will offer a few examples of those things, or people, that do not meet my personal definition of conservative standards ethically, socially or politically.

Peter MacKay and other opportunists jump right out and land right on top of my list of people who are definitely not conservative. He is one of those people currently vying for leadership of the Conservative Party of Canada. 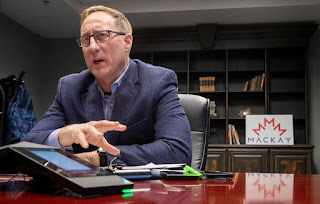 MacKay’s brand of conservatism is not conservative. His attitude seems to be totally invested in eastern Canada, as shown by his negative response to an invitation to participate in the leadership debate which took place in Vancouver last night.

MacKay is a one of the Brian Mulroney old boys club; those conservatives whose backroom tactics played a significant role, over the years, in the decision of too many members to part company with the party.

In my opinion, a truly conservative approach to change simply means making sure the change is going to enhance life in our democracy for everyone and is not based on purely partisan views.

The good old boys’ school of backroom politics, favouritism and cronyism has plagued most major Canadian political parties nationally and provincially for decades.

Once again, this is something that is definitely not conservative, in nature, because it too frequently operates without conscience or respect. It is all about power and influence without consideration for those values which make Canada a beacon for freedom and democracy throughout the world.

With the exception of MacKay and a few others, long time Conservatives have returned to the values which made the party a formidable force for change in Canada.

Careful consideration by party members of the other candidates currently vying for leadership of the federal Conservatives could help restore voter faith in the party ... and help send Justin Trudeau packing.