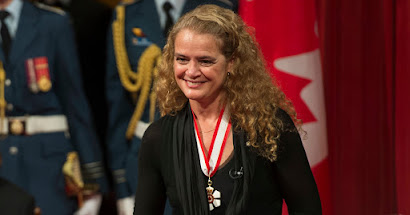 Julie Payette's controversies could be a big problem for Rideau Hall. As GG and PM consider how to move forward, the weight of the institution is bearing down on them (Aaron Wherry ~~ CBC News ~~ Aug 08, 2020)

"Prime minister," the clerk of the privy council is reported to have advised, "your biggest problem is in Rideau Hall."

That was in 2006, when Stephen Harper was Prime Minister and Michaëlle Jean was Governor General.

Fourteen years later, amid a run of unflattering stories, Justin Trudeau and Julie Payette might try to find some solace in the fact that this is not the first time the vice regal office has been said to be the location of a sizeable problem.

But the potential stakes of such a problem cannot be taken for granted. And the pressing question for both Trudeau and Payette is whether the former astronaut can continue to represent the Queen without doing significant damage to one of the foundational institutions of Canadian democracy.

The “controversy” is an orchestrated distraction and expected. The PMO is mounting an aggressive defence of the Prime Minister. Mr. Wherry is oblivious to the irony of his opening quote:
"Prime minister," the clerk of the privy council is reported to have advised, "your biggest problem is in Rideau Hall."

Governor General Payette is in limbo due to an unconstitutional shift of the Privy Council from the Executive Branch (represented by the Governor General) to the Prime Minister’s office – the Administrative Branch. This was done in March 1940 under an Order in Council (PC 1940 – 1121) issued by Prime Minister Mackenzie King allegedly as a wartime measure to strengthen Cabinet capacity.

The Payette ‘controversies’ are a huge problem for the PMO which is operating outside the constitution.

Trudeau recommended Payette for the position and found her to be less pliable than he would like. Not all Governor Generals are content to have the Prime Minister marginalize them.

The Office of Prime Minister is an appointment.

Mr. Trudeau was not elected as Prime Minister; he was elected as the Member of Parliament for the electoral district of Papineau. His election as Leader of the Liberal Party (April 2013) is separate and apart from his district election.

After the 2015 election, the Liberal Party had the majority of seats in the House of Commons, so by convention, Mr. Trudeau was appointed Prime Minister.

In 2019, the Liberals returned to power with a minority government. The Liberal administration has since been plagued with a series of scandals and failures to adhere to conflict legislation.

The recent allegations that the Prime Minister -- and Finance Minister -- have both violated the Conflict of Interest Act (and possibly the Criminal Code) are onerous ... this in part because both have previously been found guilty of violations of the Act.

On a third conviction, the Governor General would have cause to reconsider Mr. Trudeau’s appointment for the good of the nation. Convention cannot override corruption; flaunting the law cannot go unpunished.

Mr. Trudeau’s job is to govern the nation responsibly. The Governor General’s job is to listen to the Privy Council and provide advice to the government as needed. That is what the Executive Branch is all about. The Privy Council was politicized when it was moved to the PMO and that is wrong.

I do not believe that the current Governor General is above reproach. It is possible that she has problems dealing with personnel. It is also possible that members of her staff hold a high opinion of themselves and are not happy with being asked to do real work.

The PMO – GG kerfuffle is manufactured and due to the unconstitutional move of the Privy Council Office from the realm of the Governor General to the PMO.

Fix it! That is long overdue.