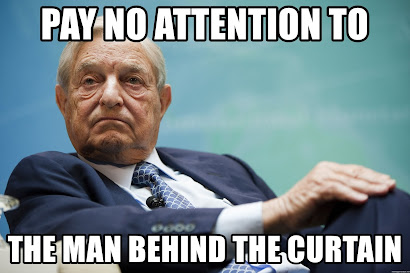 ... what is unknown to many is the influence of billionaire George Soros. For a man who casts such a long shadow across our country, most Canadians are stumbling forward without any true sense of what the Soros world vision means for the future of Canada ...

... ostensibly, Soros took control of Canadian policy with the electoral victory of the Liberals. It is well documented in the research of the Canada Decides Report to Elections Canada as well as investigative journalist VivianKrause that the 2015 election campaign is a textbook example of foreign influence on election results ...

... for Soros, defeating Stephen Harper was held out as an important pivot. Soros facilitated exchanges between U.S. Democratic backroom operatives and the Liberal Party campaign team and he channelled OSF funds into Tides Canada, an off-shoot to Soros’ left-of-centre American Tides Foundation ...

I cannot dismiss this article by Chris George as I was engaged in the 2015 election, and happened to live in a riding targeted by Leadnow.

I can vouch for the sudden appearance of a few dozen NDP campaign ‘volunteers’ who were not local or affiliated with any of the local NDP organizations. You get to know your opponents over time, and these people were not local.

The costs of fielding a squad of out of district volunteers during an election campaign is expensive. The meals, lodging and transport costs mount quickly.

I will give the Leadnow people credit for working hard; hard enough to suggest there was pay involved. These were not normal election campaign volunteers; they were on a very specific mission.

Someone with very deep pockets was involved ... and it was not the local or national NDP.

I checked the candidate expense returns. There was nothing unusual and there should have been.

The Leadnow campaign was covert, under the radar officially, but they cannot resist the temptation to brag:

Leading up to the October 2015 federal election, Leadnow ran its largest campaign ever - Vote Together. We had active field teams in 11 targeted ridings, and made recommendations in 29 key swing ridings - ultimately defeating the Conservatives in 25 of them.

Across the country, nearly 100,000 people took our pledge to vote for the best local candidate to defeat the Harper Conservatives.  The Vote Together website, with unprecedented local information on all 338 ridings, received over one million visits.

I find this frightening.

Please take the time to read the whole story as noted at the beginning of this post, as well as the Leadnow links. They are disturbing and the worst part is that Leadnow can brag openly about its interference in our elections. They are protected by the Liberals they own.

We have no reason to allow various foreign-funded non-government organizations to operate in Canada -- and should never allow foreign-funded interference in our politics or elections.

We have been sold out. None of our political parties have even hinted at foreign influence problems.

It is time to clean house.