FORSETH -- For some unknown reason, he has remained silent, without a word being spoken as to horrendous travesty to Canada’s history

UPDATE ... as of 10am this morning (08/20) he had yet to utter one word condemning it. I am thoroughly embarrassed he is our PM

Monday morning at 8am Pacific Time, Prime Minister Justin Trudeau will be in Montreal for, as the Prime Ministers Office says will be a visit to:

... the National Research Council of Canada (NRC) Royalmount Human Health Therapeutics Research Centre facility, where he will meet with NRC President Iain Stewart and several scientists. An announcement and media availability will follow 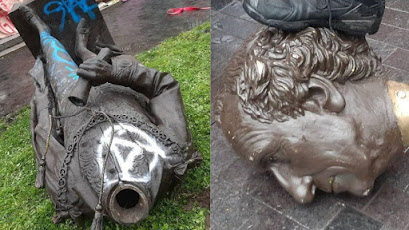 NOW, as many if not all will recall, Montreal was the scene yesterday of an act of wanton anarchy by a bunch of hoodlums who vandalized and destroyed the statue of Canada’s first Prime Minister ... Sir John A. Macdonald.

Since that event occurred, there has not be ONE SINGLE WORD from our Prime Minister decrying this destruction.

On the other hand, Official Opposition leader Erin O’Toole stated:

Canada wouldn't exist without Sir John A. Macdonald. Canada is a great county, and one we should be proud of. We will not build a better future by defacing our past. It's time politicians grow a backbone and stand up for our country

The toppling of the statue of Sir John A Macdonald by an unruly mob in Montréal is disgusting and wrong. Who elected them to be in charge of what stands or what goes?! Sir John A. was co-founder of our country. Without him we’d all be US states. Think about that!!

I’ve no problem with discussing his successes and sometimes glaring failures. But I do not abide this anarchy and cancelling of our historical record.

And former Conservative MP, cabinet minister, and now Premier of Alberta, Jason Kenney had this to say:

A mob has torn down and defaced the statue of Sir John A. Macdonald in Montréal.

This vandalism of our history and heroes must stop. As his biographer Richard Gwyn wrote, “no Macdonald, no Canada.” Both Macdonald and the country he created were flawed but still great.

Many of those on the extreme left responsible for this kind of violence claim that Canada is an illegitimate state, all the while enjoying Canada’s rights, freedoms, privileges, and prosperity. None of those things were created by accident. They come from the vision and sacrifice of those who went before us, particularly Macdonald himself.

He was an immigrant who suffered unimaginable personal trauma throughout his life, which he overcame to forge an enormous country out of divided factions.

It’s right to debate his legacy and life. But it is wrong to allow roving bands of thugs to vandalize our history with impunity.

If the City of Montréal decides not to restore Wade’s statue of Macdonald to where it has stood for 125 years, we would be happy to receive it for installation on the grounds of Alberta’s Legislature.

I, on the other hand, wasn’t quite so eloquent on Twitter as I remarked:

It is outrageous that authorities stood by and did nothing. The police should have been dousing these a$$holes with bear spray!!! I'm ashamed and embarrassed to acknowledge that #Montreal and #Quebec are part of Canada

But back to Justin Trudeau ...

For some unknown reason, even as of 9pm this evening (Sunday August 30th) he has remained silent, without a word being spoken as to horrendous travesty to Canada’s history ... and an affront to our first Prime Minister. 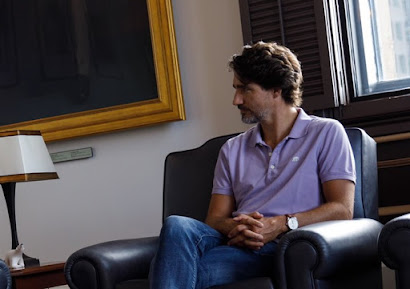 Perhaps tomorrow, while in Montreal for another photo-op, I mean, doing his Prime Ministerial duties, he might find the time to let all Canadians know that this is something that must not be repeated, and that those caught perpetrating the destruction of the statue, will receive the full force of the law.

Then again, as Wayne commented ...

This kind of anarchy is strictly the fault of Justin Trudeau, who has allowed society to disintegrate during his tenure. This is happening on his watch ... in his home town ...truly a gutless wonder...

Somehow, I think he’s got it more accurate as to how Trudeau will (not) handle it.