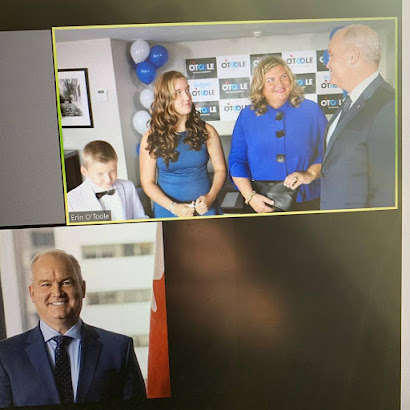 At the end of the second round, voter tabulation had Dr. Leslyn Lewis ahead (60,316 total votes) of both Peter MacKay (54,165) and Erin O’Toole (56,907), but because of a complicated system -- where every riding had a total point score of 100 points (regardless of how many members the riding had) -- Lewis was dropped of the ballot, leaving O’Toole and MacKay on the final ballot.

OKAY ... with that out of the way ... Erin O’Toole was my second choice on the ballot, and I feel certain will be able to lead the party from the opposition benches, to governing party.

Since first being elected in a 2012 by-election, and having twice campaigned for the leadership of the Conservatives, O’Toole knows what is needed to put together a winning team ... and that team will need to include the other three candidates ... each who had different versions of what the future needed to look like for the party to win.

Only through unity, can the ethically challenged Liberal government, led by Justin Trudeau, be defeated ... and that needs to happen at the earliest opportunity.