FRASER INSTITUTE -- $22.3 billion of Ottawa’s COVID spending potentially wasted due to a lack of targeting assistance

The federal government is potentially wasting more than $22 billion of $81.6 billion in COVID recession spending ... because the assistance is not being adequately targeted to those in need, finds a new study released today by the Fraser Institute, an independent, non-partisan Canadian public policy think-tank. 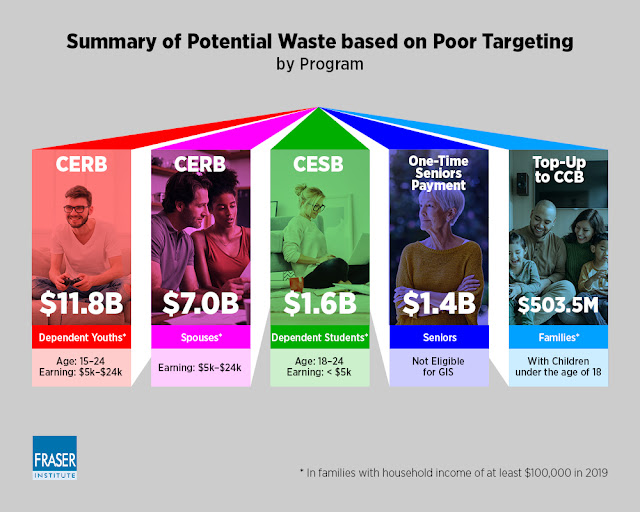 “More than one-in-four dollars (27.4 per cent) of the COVID-related spending analyzed is potentially being wasted due to a lack of targeting,” commented Clemens.

“Our research shows that billions are being borrowed to finance transfers to people whose need is at least questionable, and this at a time when Ottawa is running historic deficits,” said Jason Clemens, Executive Vice President at the Fraser Institute and co-author of Federal Government Wasting Billions on Poorly Targeted Assistance.

The study finds that a total of $22.3 billion of the federal government’s new program spending (CERB and CESB) and one-time payments linked to Old Age Security, Guaranteed Income Supplement, and the Canada Child Benefit is potentially being sent to individuals with questionable need.

In particular, young dependent children and others living in families with household incomes of at least $100,000 in 2019.

In almost every case, the benefits provided to these young people –almost 1 million of them –under CERB exceeds their monthly earnings in 2019.

... Canadian Emergency Student Benefit (CESB): $1.6 billion for an estimated 324,900 students aged 18 to 24 who are eligible for CESB while living with their parents in households with at least $100,000 income.

... One-time payment to seniors: $1.4 billion was sent to seniors not eligible for the Guaranteed Income Supplement, which is a program specifically targeted to low-income seniors.

“Stabilizing peoples’ income during a recession is sound economic policy, but the money should go to people who are actually in need, and it should replace lost income, not make people better off than they were before the recession,” said Clemens.