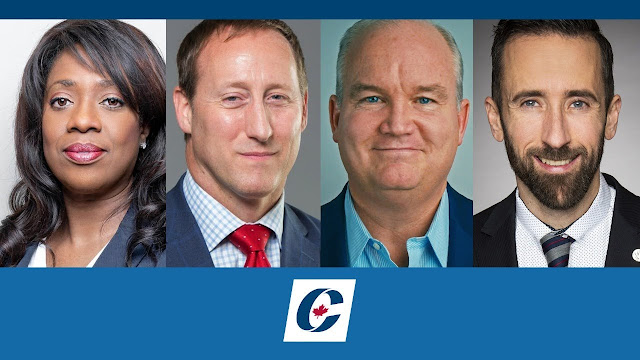 It's been a long day so this won't be a long column but I feel moved to share a few of my initial thoughts about the to-me-surprising win of the federal Conservative Party of Canada (CPC) leadership by relative unknown Erin O'Toole.

Okay, O'Toole obviously is well-enough known inside the CPC to have just won the leadership in a third-ballot counting of a somewhat complex preferential ballot between four candidates, but among most Canadians (like me) he was a relative unknown even though he had run in a previous leadership contest for the Conservatives.

He was a strong second on the first count, had a very small lead over Peter MacKay in the second count and won roughly 60 per cent in the third count, suggesting he was the second choice of most CPC members; O'Toole was especially strong in Quebec where he won more than 50 per cent of votes in the first count but he also did well in other regions.

So, who is Erin O'Toole? I confess I knew little about him until his victory acceptance speech in which he described himself as having been born in Quebec and raised in Ontario, where he now represents the Durham riding in the Toronto area. He served in the Canadian Air Force then went to law school and for a time worked in Toronto's financial sector.

He apologized to Quebeckers for his anglo-style French, which he said he learned while flying helicopters in the Canadian Navy, but as he demonstrated in his victory acceptance speech his French is fluent and confident, and as he emphasized in the campaign and mentioned in his acceptance speech he is quite sympathetic to Quebec nationalism and in his platform are measures to increase Quebec's autonomy in certain policy areas - which earned him 3,532 of the 6,800 votes cast in Quebec in the first count.

O'Toole also polled well in Ontario, Alberta and B.C. where CPC members apparently liked his aggressiveness and somewhat small-c conservative stances, such as a promise to criminalize the blockading of railways and ports.

He was first elected in a byelection in 2012 and became Minister of Veterans Affairs in the Conservative cabinet in 2015 so now (or soon) as party leader in Parliament he'll have lots of opportunities to raise his profile with voters on a wider range of issues.

There's also a good chance he'll elevate populist candidate Leslyn Lewis, a Toronto-based lawyer (who happens to be a black female) who finished a surprisingly competitive third despite not having a seat in Parliament. She also has a master's degree in environmental studies and favours some restrictions on access to abortions.

Among B.C. voters, the top candidate was veteran pol MacKay with 1,281 "points" [don't ask how the CPC calculated the votes] but O'Toole was a very close second with 1,255 and Lewis was a strong third with 1,047 while Derek Sloan - a social conservative - was a distant fourth with 617.

Though the announcement of the results was about 12 hours late due to technical problems (their automatic envelope opener was cutting ballots too), the delay may have helped the CPC because it meant the CBC-TV coverage was forced to stay live for about 12 hours instead of maybe four and now the unexpected outcome and an interesting newcomer winner will give mainstream media many more things to talk about in the weeks ahead.

Conceivably there could be a federal election called or triggered in September for a voting day in October because Prime Minister Justin Trudeau recently prorogued Parliament with a promise to come back with a Throne Speech for a new session focussed on new initiatives to help people and businesses cope with the Covid crisis.

The Trudeau Liberals do not have a majority and so need support from either the New Democratic party caucus or the Bloc Quebecois in order to pass anything major like a budget or Throne Speech, which probably will offer some major new initiatives and directions to help families that might give the Conservatives an excuse to try to topple the Liberals.

While it's obvious O'Toole IS a mainstream conservative, he's far less radical than Sloan and appears to be quite comfortable with the media - which will be a gain for the CPC.

O'Toole also built a strong base in Alberta where he was endorsed by Premier Jason Kenney and where he was the top vote-getter which is kind of interesting because it means a Toronto-based Conservative was the most popular choice in both money-rich Alberta and vote-rich Quebec.

If O'Toole can re-position himself and his party as the populist champion of both moderates and conservatives in most of Canada's vote-rich regions it's quite possible that Canada see a change of government later this year - especially if he is able to recruit Lewis and maybe even MacKay into a new populist centre-right coalition.

But of course, the Prime Minister is no slouch at populist posturing too so don't bet your family farm on the outcome yet.