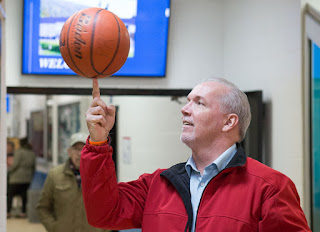 This post was originally written earlier this morning; prior to the actual election call.  It has been updated to reflect that ...

Well to no one’s surprise, BC Premier John Horgan called an election, this morning at 11am, to be held on Saturday October 24th.

A flurry of partisan, “Aren’t we great” media releases over the weekend – 55 in total from Friday morning to Sunday evening – was the first indication it was about to be called. Five more followed early this morning, but then abruptly ended at 8:30.

This is an election no one needed – that was totally unnecessary – and was only called by Horgan’s NDP government to capitalize on their current popularity ... as government ... and due to their handling of the current COVID-19 pandemic.

Voters, however, have been clear in indicating they are not in a mood for an election.

With any luck, when voters go to the polls in five short weeks, the 7 NDP cabinet ministers, who have already indicated they won’t be running, will be joined by many more who are dumped on their a$$e$ on election day.

Get ready for what I expect is going to be a hard-hitting campaign, with both the NDP and Andrew Wilkinson's BC Liberals going on the attack.

The real question mark, in my opinion, will be what impact the Conservative party, led by Trevor Bolin, will have ... how many candidates will they run ... and of course and where.

And for the Green Party – look for new leader Sonia Furstenau, along with Adam Olsen, to retain their seats. That said, I don’t expect there will be any gains for them.