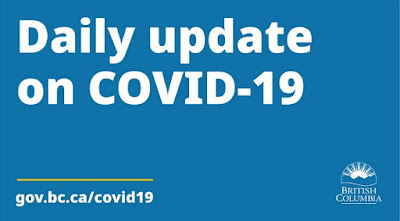 Back to school starts in a matter of days ... and a trend is appearing in the COVID-19 situation that, to me at least, should be a matter of concern.

Where we had previously gone days with little to no new cases -- of people being hospitalized -- that is no longer the case. Instead, over the past 3 weeks we have been seeing a trend in the opposite trend direction, which is becoming more and more obvious.

The August 17th joint statement announcement on the COVID-19 situation -- from Health Minister Adrian Dix and Deputy Health Officer Dr. Réka Gustafson -- indicated that 4 people were in hospital due to COVID-19 ... and of those people, 3 required intensive care.

Seven days later, on August 24th, the number of people hospitalized had a more than fourfold increase -- to 18 -- this time with 5 in ICU.

Four days ago, on August 31st, the number of people requiring hospitalization had increased to 28 ... of which 10 were in ICU.

That disturbing trend continued as yesterday (September 2nd) Dr Bonnie Henry and Adrian Dix announced that of a total 33 people were hospitalized with COVID-19 ... and that 14 were in ICU.

Today, September 3rd, another individual has been added to those requiring hospital care – and there are currently 11 in ICU. Regrettably, there was a new death bringing the provincial total deaths to two hundred and ten (210)

Those are still small numbers to be sure, however the trend is there for all to see.

The other trend which is worrisome is the average age of those who are sick.

While initially those in the higher age demographics were being impacted, it has now dropped to those who are aged 20 to 29. And who knows what will happen once BC children head back to their classrooms next week – they are after all prone to being little germ factories.

I believe we are on the cusp of a second wave – and it’s up to all of us to ensure that we don’t end up with a tsunami of people overwhelming our hospitals this fall and winter.

Wash your hands – make planful trips away from home to get what you need – and quit your whining and complaining about wearing a mask!