FRASER INSTITUTE – The changing size of government in Canada 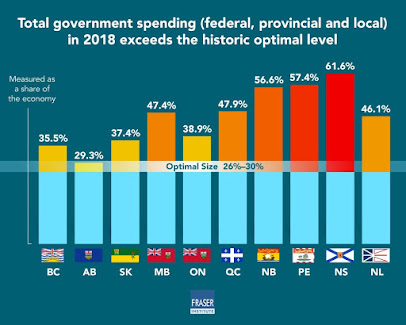 The combined size of the federal, provincial and municipal governments increased in all but two provinces over the past 10 years relative to the sizes of their economies, finds a new study released today by the Fraser Institute, an independent, non-partisan Canadian public policy think-tank.

“The size of government has been on the rise all across Canada for years, which will impact the recovery from the current recession,” said Alex Whalen, policy analyst at the Fraser Institute and co-author of The Changing Size of Government in Canada.

The study measures federal, provincial and local government spending in each province as a share of the economy (GDP), as well as public sector employment relative to private sector employment from 2007 to 2018, the most recent year of comparable data.

It finds that government size grew in every province -- except Saskatchewan and Prince Edward Island -- during the 10-year period.

In 2018, the size of government relative to the economy as a whole across Canada ranged from a low of 29.3 per cent in Alberta, to a high of 61.6 per cent in Nova Scotia.

Previous research has shown that the optimal size for government to maximize economic growth is between 26 and 30 per cent of the economy (GDP). When governments exceed that size, it imposes negative effects on the economy, such as crowding out private sector investment.

Crucially, the data used in the analysis is prior to COVID-19 and recession-related spending, meaning the size of government already exceeded the optimal size prior to the current spike in spending. 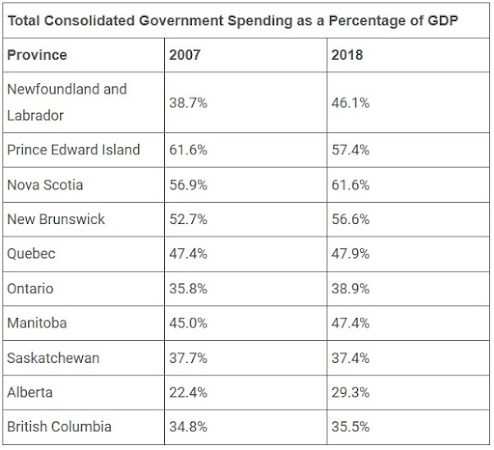 “The size of government is directly linked to an economy’s ability to grow, and so it is important to understand how governments across Canada have grown in recent years, and what impact that might have on our economic recovery moving forward,” said Steven Globerman, resident scholar at the Fraser Institute, professor emeritus at Western Washington University and study co-author.