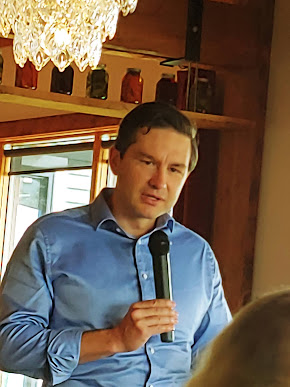 As I mentioned yesterday, I attended a smaller gathering of Conservatives in Kamloops, which was attended by Kamloops Thompson Cariboo MP Cathy McLeod, and the Conservatives finance critic Pierre Poilievre.

During the question and answer period that followed, I asked Poilievre about the idea of instituting a Universal Basic Income (UBI), being floated by the Liberals ... and what his thoughts were on that. This was his reply:


It’s too soon – it’s difficult to say what they’re going to do. I’ll give you a bit of an overview on the universal basic income issue.

With universal income ... the basic idea is everyone would get a flat income cheque from the government, and depending on the model, that cheque would be clawed back based on your earnings.

The idea originated with a free market economist in the United States named Milton Friedman whose idea was the United States government would get rid of every single social program, and replace it with a cheque in every mailbox – a cheque that would become progressively smaller the more that you worked, so that it would only go to those who needed it.

But if you’re a working-class kid, who actually has a job, working at Subway or as a waiter, you would have your basic income clawed back, based on your earnings ~~ Pierre Poilievre

What we’re hearing now though, is the idea of not only not replacing existing program with a cheque, but stacking that cheque on top of existing programs. In other words, there would be no way to pay for it – other than to keep borrowing and printing money as the government is now doing.

I asked our parliamentary budget officer to give us the cost of a universal basic income, and I said, “Using the pilot project that the Ontario government had created for such a program, which would pay $17,400 per person – or $24,oo a couple – what would it cost the Government of Canada to provide such a program?”

He came back and said it would cost 73 billion dollars.

And of course, there’s no source of revenue from which to pay for all this free money.

Furthermore, that particular proposal that would actually, ironically, help the affluent people more than it would working class people. The biggest beneficiaries would be the small segment of students whose parents are wealthy, which would mean they wouldn’t have to work (while attending college/university). They would live in the basement of their parents’ home, wouldn’t have to have a job, and they would get the full amount.

But if you’re a working-class kid, who actually has a job, working at Subway or as a waiter, you would have your basic income clawed back, based on your earnings.

In the end -- it would be a program that would be stacked on top of
all of the existing governmental programs. The only way to pay for
that would be a monstrous tax increase ~~ Pierre Poilievre

So, ironically the kid from a wealthy family would get a lot more than the working-class kid, under this program. And, to pay for it you have to raise taxes on workers, so it would be a wealth transfer to the privileged from the working class people.

My view is this; when ever government promises you money -- without work -- in the end they will be giving you work without money, because you’re going to have to pay for it on your taxes. And when your income taxes go up, it effectively reduced your take home pay. 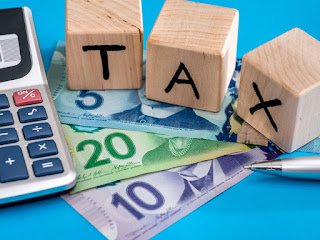 I believe we need a system that rewards work, and effort, and enterprise ... rather than try the tranquilize the population with money for nothing.

I DID ASK A FOLLOW-UP as I wondered if the Universal Basic Income would be a supplement for existing provincial programs, such as social assistance or disability income – in other words, additional income on top of those things. This was his response:

So, the truth is we don’t know; the answer is, it could be.

You’d have to get the provinces to eliminate their income support programs, and agree to let the federal government replace those programs, with a basic income.

You’d have to find a way to convince the provinces that the only way that the federal government could ultimately pay for it would be to stop transferring as much money to the provinces.

You can’t do both. The government of Canada could not transfer money through the social transfer to pay for welfare at a provincial level, and then also send welfare cheques from Ottawa.

So, this is the complexity that comes along with the idea of universal basic income. Right now, we have something like 58 different support programs across this country. On the federal level there’s OAS, GIS, CPP, CPP Disability, EI ... and that’s just a few. Then at the provincial level you’ve got disability programs ... housing programs ... drugs plans ... etc, etc.

Again, the government of Canada would have to secure agreement from lower level governments to replace all of their programs with one single federal one.

I don’t think that’s realistic – and so in the end -- it would be a program that would be stacked on top of all of the existing governmental programs ...

... the only way to pay for that would be a monstrous tax increase.