RUSTAD – It has gone so far, under the current NDP, that you aren't even recognized as a ‘person’ under their new legislation 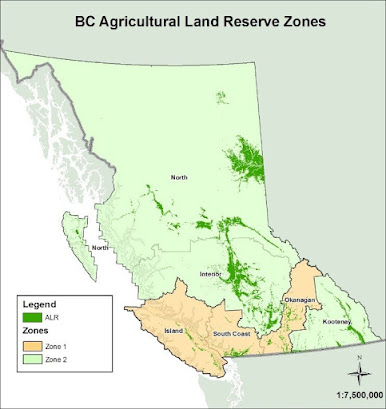 The Agriculture Land Reserve (ALR) in BC was first created in the mid 1970s and comprises about 5% of BC's land. I have been told that when it was originally created, there was supposed to be a benefit to land owners for the impact on their rights.

Protecting the degradation of farm land is significant and very important for the people of BC. But in addition, for me, another key factor to consider is the rights of land owners. Over the years, the ALR has had significant impacts on land owner's rights.

I fully support the creation of the ALR, and the goals of protecting agricultural land ... but ...

... what is the compensation, for land owners, for losing their rights?

It has gone so far, under the current NDP, that you aren't even recognized as a "person" under their new legislation. It defines a "person" as a local government or first nation when it comes to trying to do something with your land.

I think it is time for land owners (farmers), and the government, to have a new conversation about the rights the owners have surrendered versus the benefits they receive for this impact.

Perhaps quantify what those rights are, what benefits are currently received and what a new agreement should look like in order to continue protecting agricultural land for the benefit of everyone in BC.

Please note, this is not necessarily any political party's position. It is simply me making a suggestion that this issue should be put on the table for consideration and discussion.

JOHN RUSTAD ... was first elected as the BC Liberal MLA for Nechako Lakes (2005); he previously served as the Minister of Aboriginal Relations and Reconciliation -- Minister of Forests, Lands and Natural Resource Operations -- and as Parliamentary Secretary for Forestry.