We do the economically idiotic and suicidal thing; selling our resources at a discount to the Americans, and buying at a premium from the Saudis - it’s a plan for economic self-destruction 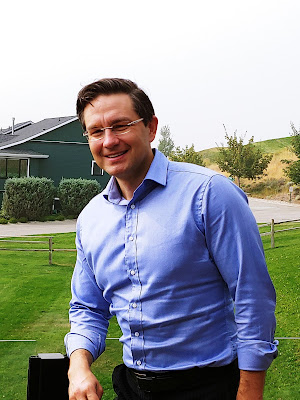 This afternoon (September 14th), Conservative Party Finance Critic Pierre Poilievre, joined Kamloops Thompson Cariboo MP Cathy McLeod for a small luncheon.  He spoke to approximately 50 guests, and the following is a summary of what he had to say:


... she (Cathy McLeod) came up to me actually, not so long ago, about a month ago, and she said, “Pierre, do you believe in free speech?”

Justin Trudeau does not believe in free speech – he charges the WE Charity at least $10,000 a pop ...

... it’s great to be back in Western Canada ... I was born and raised in Calgary Alberta and I spent my entire childhood there. And I was looking forward to coming here and breathing the Western Canadian air (laughter from the audience). I said, “Cathy, what’s going on around here?”

She said, “It’s been like this ever since Trudeau legalized marijuana.”

... Public Finance, for which I am our party’s spokesperson, is to the politician, like a hangover from a drinking binge. They have all of the fun and excitement of spending the money, but none of the responsibility to pay for any of it.

Right now, we have a Prime Minister who is spending your tomorrow, on his today.

We have right now a three and eighty-billion-dollar deficit. This is just a phenomenal dollar value. About 7 times the size of the previous all-time record.

It will add 50% to our national debt – and we’re only halfway through the fiscal year. In other words, think about it this way. We have $700 billion in debt before COVID – we will have well over a TRILLION dollars of debt just from this one fiscal year....

... just to give you an idea of the magnitude of that debt ... this is not the worst crisis we have had. We’ve been through world wars, and great depressions and recessions – so let’s compare this crisis to those.

In World War 1 we had a deficit that was equal to about 6% of Canada’s then GDP.

In the great depression, we had a deficit that was equal to 8% of what was then Canada’s GDP.

In the great global recession, when the financial system of the entire world came crashing down in 08/09, we had a deficit of about 3.8% of GDP.

In other words, our deficit now is almost 3 times the size of – in relative terms to our economy – of our biggest deficit in WW1.

It is twice the size of our biggest deficit in the great depression.

And it is about 4 or 5 times the size of our biggest deficit during the great global recession of ’08 / ’09.

But here’s the difference.

Not only at that time were our soldiers fighting against Hitler, and Mussolini, and Imperial Japan ... and not only then was our government selling bonds in which to pay for it ... but when our soldiers came back – when our grandparents came home – what did they do when they were exhausted from fighting a world war?

No, they didn’t. They immediately began repaying the debt that we had accumulated defending the world against totalitarianism.

In 1947 – two years after the war had ended – they had the biggest budget surplus in Canadian history ... 5% of GDP, which would be the equivalent of having a surplus today of $120 billion dollars.

Our grandparents came back from war, having defended our freedom, and got busy defending our finances.

They did not believe, even though they were deserving, that it would be appropriate to pass on to the future generations the cost of paying their bills. They quickly paid down the debt and put our nation on a solid footing ... 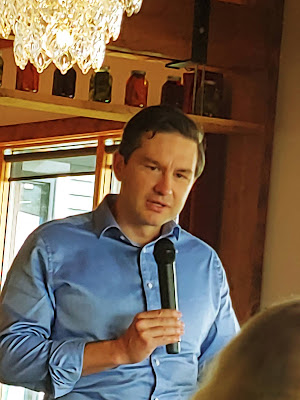 Imagine, if we could, having a government in Ottawa that had the same kind of honour and integrity as our grandparents did when they defended our freedom and protected our finances, and left us on solid footing here in Canada.

That’s the kind of man we have in Erin O’Toole. A veteran – the son of a working-class GM family and a business lawyer ... he has the kind of decency and common sense to restore the values of this country. And you know, he wants us to actually make things again in this country, instead of simply outsourcing our entire economy to China and other economies – and then putting the purchase of those goods on our credit card – making us constantly at the mercy of foreign interests and other nations.

Erin wants to unleash the power of the free enterprise system, so that we produce the wealth, and the goods, and the services necessary to provide for ourselves.

And we have sure learned how vulnerable we are through this COVID period.

Not even able to provide the basic protective equipment for our people without relying on foreign countries. That is because our economy right now is suppressed by excessive government regulation and taxation – preventing us from actually producing anything in this country – preventing us from building pipelines – from opening new factories and mines – and from producing the wealth that is necessary to fund any successful and prosperous nation.

... Trudeau has effectively killed, or at least delayed, three pipelines; Northern Gateway, Energy East, and Trans Mountain which at least we’re told is going to be built. Pipelines that would have allowed Canada to sell its oil to its own customers, and to the fast-growing Asian market. That would have created jobs for Ontario steelworkers, and for pipefitters and welders here in British Columbia. For oil workers in Northern Alberta and Saskatchewan, and for refinery workers in St. Johns New Brunswick.

So instead we do the economically idiotic and suicidal thing ... selling our resources at a discount to the Americans, and buying it at a premium from the Saudis.

That is not a plan for self sufficiency – it’s a plan for economic self-destruction! 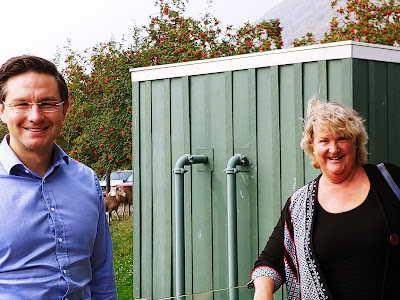 It is an approach that will be reversed under Erin O’Toole. We will reward the hard-working people of this country, and we will bring a working man and woman’s recovery ... and we will build on the values that were passed down to us from those who came before us.

We will bow before no nation.

We will be a strong and independent country again.

That is the visions for which Cathy, and Erin O’Toole, and hundreds like all of you are working for – and it’s one I believe will triumph in the forthcoming election.