Justin Trudeau will be getting a few more holiday greetings than usual this year, thanks to supporters of electoral reform. 8300 cards are headed to Ottawa from across Canada, calling on the Prime Minister to commission a National Citizens’ Assembly on Electoral Reform. 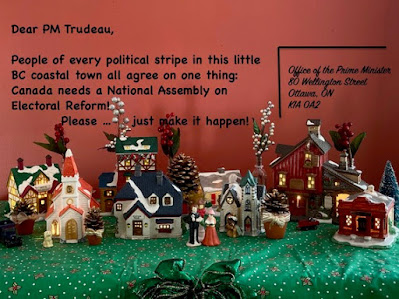 Make Votes Matter, the UK campaign for proportional representation, will be sharing photos of UK citizens who are mailing cards to their MPs on the same day with the same hashtag.

Canadian MPs from three parties will be sharing videos in support of the action.

“It’s a way for us to remind Mr. Trudeau that Canadians haven’t forgotten his commitment to fix our broken electoral system,” says Anita Nickerson, Executive Director of Fair Vote Canada.

“It’s not too late for him to follow through on the recommendation his own party made when they walked away from reform last time. If anything, support for reform has grown since then, and it has become clear that it should be taken out of the hands of politicians.”

A National Citizens’ Assembly on Electoral Reform has the support of Lloyd Axworthy, Chair of the World Refugee Council, Walter Robinson, past President of the Canadian Taxpayers’ Federation, Kevin Page, former Parliamentary Budget Officer and many other notable Canadians.

In November, 2020, NDP leader Jagmeet Singh sent a letter to Justin Trudeau asking the government to work with the NDP to get a Citizens’ Assembly started.

The Greens also support this.

A 2020 OECD report looking at 279 citizen-led processes points to Citizens’ Assemblies as the path to engage citizens in democracy and tackle complex issues where partisan self-interest is blocking progress.

A September 2020 Leger poll showed 80% of Canadians support a National Citizens’ Assembly on Electoral Reform, with strong support from voters of all parties.

A sample of messages in the cards going to Justin Trudeau from Canadians:

“Dude, like it sucks that you totally blew off all the people who you promised electoral reform. And like, dude, you don't get to be King. Democracy, eh. Do the right thing.”

“I'm of your mother's generation, and I ain't dead yet! I even campaigned for your dad back in 1968! Don't say there's no public interest., especially after it was one of your election promises … we need democracy, as reflected in places like New Zealand and countries of the EU, where every vote counts equally.

Let us get as far away as possible from the either/or enmity in the US system and make our system conducive to cooperation and focus on solutions. Let's get a citizen's assembly on voter reform and make every citizen's vote be reflected in election outcomes.

That's democracy and you could be the hero (I won't say "saviour") that makes it happen. Now THAT would be a REAL Christmas (birthday) gift!”

“Thank you for your future decision to implement a national citizens' assembly on electoral reform :)) We forgive you for lying the first time!”

“I realize calling upon a politician such as yourself to uphold a promise and do the moral thing is next to impossible, but people still believe in Santa.”