FELDSTED -- If elected representatives don’t have different views of policies and programs, what is their purpose

Trudeau’s Christmas message focuses on the bright side. PM says Canadians should ‘give thanks for all that unites us’ ~~ CBC News ~~ Dec 24, 2020 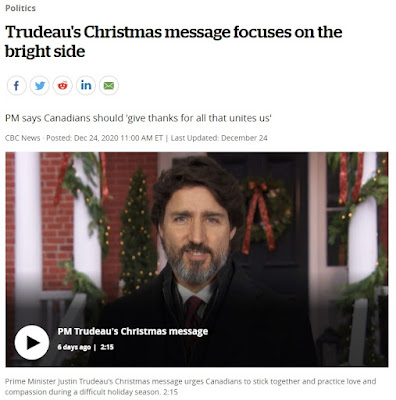 Prime Minister Justin Trudeau’s Christmas message calls on Canadians to stay united as a country and see the silver lining in a chaotic year. In his statement released Thursday, Christmas Eve, Trudeau acknowledged that this holiday season was unique in Canadian history and many across the country would be having a very different experience than in past years, with fewer family gatherings and visits with friends.

“This time of year is supposed be full of joy, light and family traditions,” Trudeau said. “But this Christmas is different.” .....

With a few million others, I have hope that we can rid ourselves of this pompous ass early in the New Year. Our 2020 Christmas is a direct result of his failed COVID-19 coronavirus containment strategy. Mr. Trudeau has no bright side; he is as dim as a brick. I find it insulting when he uses ‘we’ when talking down to us. He is far too remote from us to have any concept of our desires, dreams or needs.

We stick by one another during difficult times and show love and compassion for one another despite ongoing government efforts to segregate and divide us.

We are tired of politicians lecturing us on the evils of discrimination and the essentials of equality to a peaceful and prosperous society. At the same time, they enact policies and programs targeted at different groups in our society. Either we are equal or not.

We have been through decades of successive governments pledging to treat indigenous people with the respect they deserve and taking no action to fulfill the pledges. Why would any other segment of our society expect better treatment? Talk is cheap, and political promises are worthless.

We cannot expect better political representation by re-electing incumbents who have not stood up for us during an epidemic and allowed millions of people to have their incomed removed and their savings and investments threatened or lost. We have watched governments spend months stumbling from crisis to crisis in a growing catastrophe.

Whether in government or opposition, no politician has stood up and fought for the millions of failed coronavirus strategy victims. We have had no journalists investigating why strategies have failed. It appears that everyone is singing from the same song sheet. What happened to the independent analysis, thinking, logic and reasoning that underpin democracy?

We have a very diverse society with a wide range of experiences, beliefs, religions, education, and opinions reflected in our representation.

Where are the robust debates in our legislatures and parliament?

Why are the majority of our MLAs and MPs not allowed to make their views known?

If elected representatives don’t have different views of policies and programs, what is their purpose?

The stage farce known as Question Period indicates a democracy in tatters where the elected members have no respect for the institution or traditions of the essential elements of our democracy. That disrespect is surpassed by their disdain for the people who elected them.

We have the power to change that. Don’t re-elect any of them. Put 338 new faces in parliament. Political parties will lose their stranglehold on our representatives if we make it clear that they will only last one term without fundamental changes.

We have the power; let’s use it.