On the good news front for 2021, the Canadian Association of Petroleum Producers (CAPP) is forecasting a 14 per cent increase in upstream natural gas and oil investment in 2021 – an expected increase of $3.36 billion this year, reaching $27.3 billion. 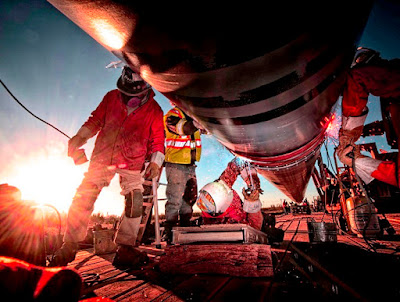 The planned investment for 2021, while increasing from the lowest levels in more than a decade, would halt the dramatic decline seen since 2014, when investment sat at $81 billion. This year’s forecast represents a stabilizing of industry investment and the beginning of a longer-term economic recovery.

The additional spending is primarily focused in Alberta and British Columbia, while numbers in Saskatchewan show modest improvement and offshore investment in Atlantic Canada is expected to remain relatively stable compared to 2020.

Stated Tim McMillan, President and CEO of the Canadian Association of Petroleum Producers:

“It is a positive sign to see capital investment numbers moving up from the record lows of 2020. This can be read as the start of what we expect will be a long road to economic recovery for the natural gas and oil industry and the Canadian economy as a whole.”

One year ago, CAPP’s initial forecast for 2020 expected investment to reach $37 billion; however, a crude oil price war between Russia and Saudi Arabia in March of 2020 and the global economic impacts of the COVID-19 pandemic contributed to an unprecedented 31 per cent drop in investment, wiping out more than $12 billion of planned spending.

The expected 2021 increase of investment into the Canadian economy is partly due to the availability of COVID-19 vaccine globally, which should lead to higher economic activity and increased energy demand.

The International Energy Agency (IEA) projects the global economy will return to pre-COVID levels in 2021 while global energy demand is expected to reach its record high pre-crisis levels in early 2023. This growth offers significant opportunity for Canadian natural gas and oil producers as their access to global markets expands.

Other contributing factors to the capital spending increases are government supports introduced in 2020, including many at the provincial level.

After reading the latest from the Canadian Association of Petroleum Producers, I asked Stewart Muir, Executive Director of Resource Works for his thoughts. He responded stating:

“Between Trans Mountain Pipeline (TMX), Coastal GasLink (CGL) and LNG Canada, it's clear that B.C. is the location of a large part of 2021 Canadian energy investment. I found it encouraging to see the upbeat tone from CAPP at a time when the oil and gas sector is struggling to recover as well as evolve.”

He continued stating, “With LNG prices skyrocketing (up to $30 per unit up from as little as $2, which is incredible even though it's not going to stay at that level), the visionary moves over the past decade to enable market access for Canadian gas was clearly the right move.”

Specific to British Columbia, the Canadian Association of Petroleum Producers, is expecting growth in upstream investment at about 29 per cent; up to $3.9 billion from an estimated $3 billion in 2020. This increase is based on the following:

1) The province’s support for Liquefied Natural Gas remains a driver for investment with the LNG Canada project under construction — one of the largest capital projects in Canadian history.

2) BC took a step in addressing competitiveness concerns for trade exposed industries by setting benchmarks for its CleanBC Industry Incentive Program which recognizes industry’s leadership and will refund a portion of the provincial carbon tax (above $30/tonne). This is a first step to help better enable B.C. commodities to compete.

3) In 2020, BC Hydro reduced industrial electricity rates by one per cent and the province delayed its scheduled increase of the provincial carbon tax.

That’s good news according to Conservative BC leader Trevor Bolin who indicated this kind of investment would create long lasting permanent jobs in rural areas and extend financial sustainability for communities, and to government.

“British Columbia does its natural resources better than anyone in the world, ensuring best practices are being used, unlike many other jurisdictions.”

Bolin then continued. “Through changes in technology, we are making it safer to enable us to continue well into the future.”

According to CAPP, Canada’s three western provinces (BC, Alberta, and Saskatchewan) have also reached equivalency agreements with the federal government on methane emission reduction regulations, providing industry with predictability and a regulatory framework that allows for a solutions-focused approach while enabling industry to advance technological innovation.

“As one of the largest private investors and employers in the country, the natural gas and oil industry can be a foundation for national economic recovery. The industry is committed to working with governments, at all levels, to create an environment where businesses can thrive and attract investment back to Canada.

This is how we will maintain jobs and create new opportunities for Canadians”, stated the CAPP President and CEO, Tim McMillan.