Watching CBC and CTV coverage of the events in Washington during on Wednesday was mind-blowing. Canadian media reporters were pro-Democrat and virulently anti-Trump. The message was clear that current President Trump was entirely to blame for an assault on the American Capitol.


I do not condone political violence. It is the prelude to war. The foundation of democracy is to replace violent disputes with debate and an orderly expression of will through an independent and trusted secret ballot. 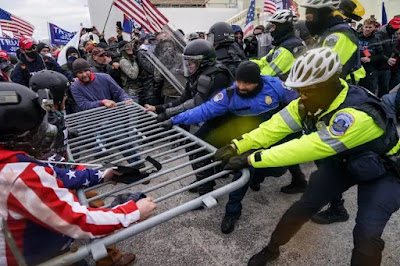 Events in America should alarm us. Listening to the Democratic and Republican House leaders talk about the sacredness of the Capitol chambers they occupy was disgusting. The occupants define the chambers. A contingent of amoral con-men and grifters in a cathedral will express the cathedral’s reputation.


And Jesus went into the temple of God, and cast out all them that sold and bought in the temple, and overthrew the tables of the money changers, and the seats of them that sold doves, And said unto them, It is written, My house shall be called the house of prayer; but ye have made it a den of thieves.


You need not be a Christian or member of any faith to understand the principle.


The demonstrations in Washington and elsewhere in the US were expressions of frustration due to state officials’ failure to maintain confidence in the electoral system. Refusing to consider requests for recounts and reviews of suspected fraud invited the conclusion that there was something to hide.


The refusal to audit election proceedings was wrong. When protestors persisted, election officials claimed there was no evidence of wrongdoing, but evidence depended on an election audit they refused to conduct. The stonewalling was a pernicious abdication of fiduciary responsibility.


The concept that state election officials can dictate how to conduct a democratic election is rubbish. They must prove to electors that only qualified electors have voted and that there is no interference or meddling in how valid votes are counted and tabulated. The tail cannot be allowed to wag the dog.


‘The lady doth protest too much, methinks,’ is one of those lines from Shakespeare’s Hamlet that is quite simple but expresses enormous complexity of thought and emotion.

Calls for investigation into US Presidential election results were treated as personal criticisms of state election officials rather than calls to analyze the system they administer. Scoundrels wrapping themselves in the flag and declaring unwavering patriotism is not an acceptable response to calls for investigation of potential dereliction of duty.


The events playing out in the USA are of interest to us in Canada as our governments increasingly answer valid questions with “move along, nothing to see here.” Answer our questions, and we will decide if there is or is not something to concern us.