Despite common misperceptions, spending on public schools across Canada has increased in almost every province in recent years, finds a new study by the Fraser Institute, an independent, non-partisan Canadian public policy think-tank. 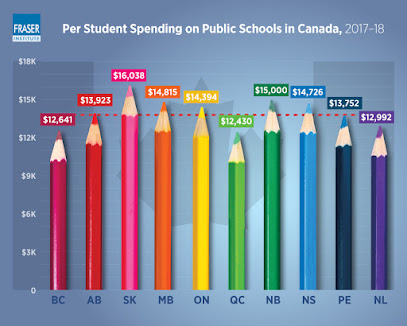 “Contrary to what we often hear, spending is on the rise in public schools across Canada, and in most cases, it’s outpacing inflation and enrollment changes,” said Tegan Hill, an economist with the Fraser Institute and co-author of Education Spending in Public Schools in Canada, 2021 Edition.

Nationally, inflation adjusted per student spending on public schools increased by 3.8per cent.

Nova Scotia (15.2per cent) and British Columbia (7.6 per cent) saw the largest increases per student, followed by Prince Edward Island (7.3 per cent) and Quebec (6.8 per cent). Newfoundland & Labrador and Alberta were the only provinces to experience a decline in real per student spending on public schools, at -6.3 and -0.6 per cent respectively.