Opposition Critic for Education Jackie Tegart is calling on the NDP to provide clarity about its commitment to upgrade air ventilation systems in B.C. schools as part of the province’s COVID-19 response. 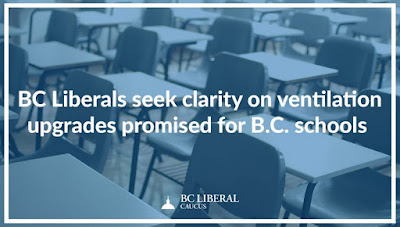 “Last September, the province received $242.4 million in federal funding to expand health and safety measures in K-12 schools but so far, we don’t have any idea about how that money has been spent,” said Tegart.

“With B.C. now deep in the second wave of the pandemic and more in-school exposures and transmissions by the day, the issue of improved ventilation in B.C. schools has never been more important. We now have a better understanding of how the virus is spread and the importance of ventilating indoor air — and students, educators, and parents deserve to know what upgrades are being made to improve the safety of our schools.”

In a letter to NDP Education Minister Jennifer Whiteside, Tegart has called on the NDP government to publicly disclose further details on the planned ventilation upgrades, including how the $242.4 million federal government grant was allocated, a breakdown of planned and completed ventilation system upgrades in B.C. schools, and greater clarification on which administrative bodies will be responsible for the allocation of these resources and upgrades.

“The health and safety of students is a responsibility that rests with this government. Amid new information and growing concerns from parents and staff for the safety of our students, British Columbians are looking for transparency regarding when these vital ventilation system upgrades will take place,” added Tegart.

“We want to ensure that the NDP has a concrete plan, budget, and timeline for these improvements so that students, educators and support staff are all kept safe.”