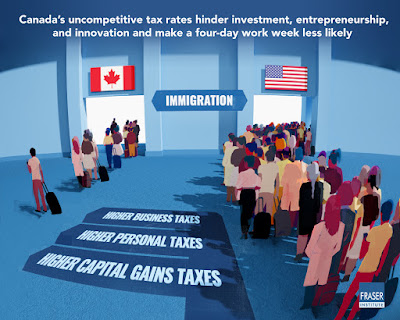 If governments across Canada want to help increase productivity — and the possibility of a four-day work week — they should lower tax rates on business, capital gains and personal income, finds a new essay released today by the Fraser Institute, an independent, non-partisan Canadian public policy think-tank.

“Some types of taxes do more damage to the economy than others, so policy makers should move away from the most damaging taxes to help improve economic and productivity growth and increase the possibility of a four-day work week in Canada,” said Jake Fuss, senior economist at the Fraser Institute and co-author of Increasing Productivity Through Tax Reform.

Among 36 OECD countries in 2019, Canada had the 10th highest business tax rate (26.2 per cent), higher than countries such as the United States, Sweden and Denmark.

For example, people may hold on to existing investments to avoid paying taxes rather than selling the investments and reinvesting in more productive endeavours.

“By lowering tax rates on personal and business income, governments would encourage and incentivize the very things we need more of—investment and entrepreneurship, which lay the foundations for a four-day work week through improved productivity,” said Alex Whalen, Fraser Institute policy analyst and study co-author.

This essay is part of a series published by the Fraser Institute, which focuses on policy reforms that can improve productivity growth and lay the foundation for a four-day work week.