In the eyes of provincial law going back 175 years, and which is still in use today, a great many lives are considered worthless

According to the BC Wrongful Death Law Reform Society the fight for a fair wrongful death law has recently generated considerable media attention in British Columbia, with news outlets across the province reporting on the campaign. 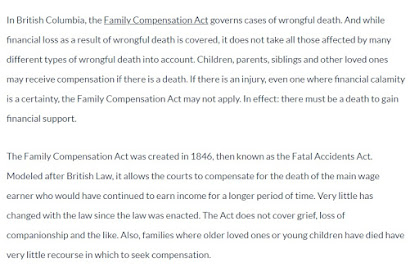 I have to admit I was not aware of this campaign, until I saw it on a Global News story out of Vancouver early last week.

According to the society, BC’s current Family Compensation Act (FCA) only takes into account the direct financial losses resulting from death, while others who may not represent an immediate financial loss ‘are a class of people whose lives are not fully valued or respected when they are killed in BC’. In other words, a great many lives are worthless in the eyes of B.C. law, a point which was also made several times in the news story I saw. And even though the provincial government has been made aware of the issue over many years, BC’s wrongful death laws, unlike every other province, have not had any meaningful changes that provide a modern standard of human value.  A number of days ago I spoke with a woman who shared the story of her mother who died in care 10 years ago. With a voice filled with emotion, she said to me: ‘While I am not part of the group currently trying to get changes made to the legislation, I was incredibly pleased to see the issue in the news.   When my mother died in ‘care’ due to gross negligence on the part of the facility, I spoke to many lawyers, none of whom would touch a wrongful death suit. They all said that, with the current legislation, it was a waste of time and that the only award the court would give would be based on lost income.   I did not wish to profit from my mother’s untimely death; however, I did want to see a financial punishment that would help in bringing about much needed change. The act under which they operate had been contravened in three separate places yet there was nothing that could be done, and no penalties administered. Sadly, despite that, seniors are still in their care.’ It certainly seems that often those who wrongfully take the lives of others can enjoy tort immunity – in other words shielded from the consequences of their negligence -- where there is little or no financial cost to those who have lost a family member considered to be a financial dependent.  Meaning, in the eyes of provincial law going back 175 years (1846), and which is still in use today, a great many lives are considered worthless. I have to wonder, as countless others have for some time now, how many more years will this be allowed to continue before our provincial government makes long overdue changes to this situation?