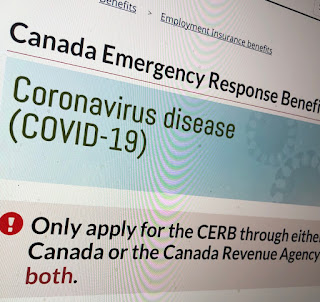 It is hard to imagine why our government would choose to increase anxiety levels for nearly half a million Canadian Emergency Response Benefit (CERB) recipients and belatedly issue an ‘oops, we didn’t mean that.’ Those who had a marginal (just over $5,000 gross) income in 2019 were already in dire financial trouble.

Canada Revenue Agency (CRA) declarations after the fact that they meant $5,000 NET income is nonsense. Revenue Canada employees may think of income in net terms, but the public does not.

While younger generations may find Prime Minister Justin Trudeau’s announcement that his government will not pursue CERB recipients with a $5,000 gross income who otherwise qualify for the program as benevolent, older people will recognize the iron fist in a velvet glove.

The term comes from Latin: “suaviter in modo, fortiter in re” translated by Napoleon as “soft of speech and manner, yet with the inflexible vigour of command.”

Recipients of CERB payments are now wrestling with taxes owed on income replacement. When the payments were announced, the government announced CERB payments would be taxable. That is inexplicable as the same government requires employers to deduct income tax before payment to avoid the difficulties people face filing their 2020 tax returns.

Hidden in all this is the unprecedented action of the government to close down businesses and services without justifying the action as necessary in a free society. The sets an ugly precedent.

We see incremental shifts by our federal government from an entity created to serve us in matters beyond the capacity of local provinces to a government that controls our livelihoods and, through that, our very lives.

It is a grand plan to shift Canada and her people from a democracy to an autocracy. Be wary!