Ensuring tanker and other shipping traffic is safe is of critical importance, as are stewardship of both our coastal environment and our export economy 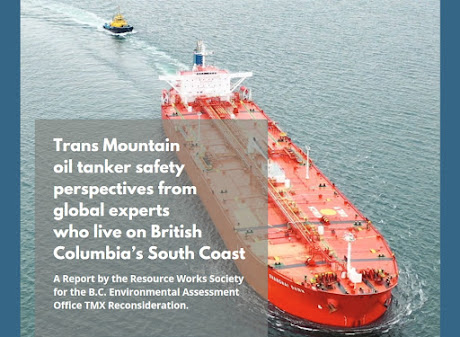 Resource Works’ report takes the form of interviews with eight individuals, most of whom have spent their entire careers working protecting public and coastal safety in the marine environment, many of them in senior roles. The report is entitled Safe Passage: Trans Mountain oil tanker safety perspectives from maritime experts who live on British Columbia’s South Coast.

“Ensuring tanker and other shipping traffic on B.C.’s coast is safe is of critical importance, as are stewardship of both our coastal environment and our export economy,” says Stewart Muir, Executive Director of Resource Works and co-author of the report. “Given that, we wanted to bring out the oft-neglected voices of people who have dedicated their entire working lives to ensuring shipping on our coast is done safely so we can truly understand the situation today and thus make informed decisions.”

The report features in-depth interviews with:

In detailed interviews, the subjects were asked to reflect on their experiences with coastal safety, measures in place to protect the coast today, and how measures should evolve as shipping traffic increases due to the TMX expansion.

In his comments, marine engineer and naval architect Robert Allan summarized a theme common throughout the interviews. “I believe that in the vicinity of the port of Vancouver, through the Gulf Islands and out to Victoria, the measures that are proposed – both proposed and presently implemented – result in the very safest measures that can be taken while dealing with tanker traffic. The speed is controlled. The operations are controlled in terms of tide stage and time. You've got multiple layers of safeguards within the vessels themselves, and through the system of escorting that's being used. You've got trained eyes, everywhere in the system. I would say that every resident should have basically almost zero concern.”

“A central theme that emerged in our interviews is that the safety measures in place today on B.C.’s coast are robust and comprehensive across all aspects of shipping,” says Margareta Dovgal, report co-author and editor and Resource Works’ Director of Research.

“In conducting these interviews, I was consistently impressed by the passion and deep understanding of the issues the subjects brought to the dialogue. Clearly, marine safety has a long history of being taken seriously in B.C. and we have the ability to evolve into the future as shipping traffic changes.”

The complete paper can be read here: https://www.resourceworks.com/safe-passage

Since its founding in 2014, Resource Works has published numerous expert reports examining a range of issues, including tanker safety.