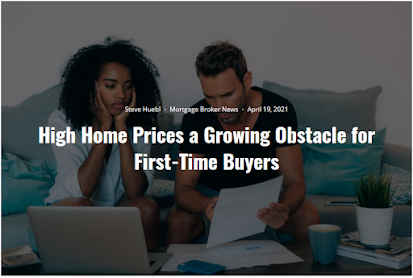 The ongoing surge in home prices across the country is discouraging a large number of young non-homeowners, many of whom say they’re giving up on the dream of homeownership altogether.

More than a third (36%) of non-homeowners under 40 believe they will never own a home, while 62% of Canadians believe a majority of people are being priced out of owning a home for the next decade, according to a recent poll from RBC.

“The road to homeownership isn’t always easy, and the last year has created both challenges and opportunities for homebuyers,” said Amit Sahasrabudhe, Vice-President of Home Equity Financing, Products and Acquisitions at RBC.

The problem is that despite best efforts to save for a down payment, hopeful buyers simply can’t keep pace with today’s price gains.

In March, the average home price was up more than $172,000 compared to a year earlier. That’s a 25% annual gain, working out to more than $14,000 of price appreciation each month. A majority of Canadians (61%) believe that prices will continue to go up in the immediate future.

A majority of first-time buyers (84%) are relying on personal savings for their down payment, according to recent data from Mortgage Professionals Canada. Other sources include withdrawals from RRSPs (26%) and relying on gifts from parents or other family members (25%).

It’s intuitive that the higher the home price, the larger the down payment that is needed. But now, with average prices surpassing the $500,000 mark, down payment requirements have leapt higher. That’s thanks to a 2015 Department of Finance rule change that requires borrowers to put 10% down for the portion of the purchase price above the half-million-dollar mark. For the amount up to $500,000, the minimum 5% down payment applies.

Nearly half of current non-homeowners (48%) who plan to purchase a home in the next two years say their budget is less than $500,000, well short of national home price of $716,828, according to CREA. Even when the high-priced markets of Toronto and Vancouver are taken out of the equation, the national average is still above the half-million-dollar mark at $556,828.

While 86% of RBC’s survey respondents who plan to buy in the next two years have money saved up, it may not be enough to comfortably put an offer on a house, depending on the market, and have money left over for closing costs.

“Building up a down payment can often be the biggest barrier to buying a home, especially as prices continue to climb in the pandemic environment,” Sahasrabudhe added.

Despite the hurdles, as of January more than a quarter of non-owners (27%) said they still plan to buy a home in the coming year, despite rising prices, according to the MPC report cited above.

Steve Huebl ... is a graduate of Ryerson University's School of Journalism and has been with Canadian Mortgage Trends and reporting on the mortgage industry since 2009. His past work experience includes The Toronto Star, The Calgary Herald, the Sarnia Observer and Canadian Economic Press. Born and raised in Toronto, he now calls Montreal home.