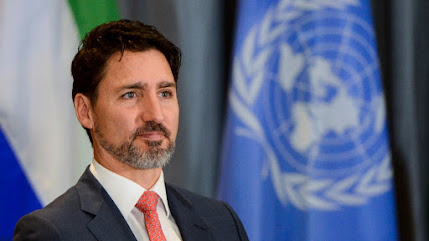 The Prime Minister of Canada committed on Thursday to “blow past” (Trudeau pledges to slash greenhouse gas emissions by at least 40% by 2030) our proposed Paris Accord emission target of 30% reductions in GHG emissions (from a 2005 baseline) by 2030, and get to 40-45% reductions.

But at a certain point – and we passed it a long time ago – the numbers mean absolutely nothing to anyone. So why not bigger ones? Just keep making it up as you go.

Erin O’Toole has bought in – he is saying the same thing, only using a slightly smaller number.

Corporations across Canada are doing the same, making bizarre commitments to distant targets – 2030 or net zero or whatever else - hoping that nobody will hold them accountable and that, by parroting the Prime Ministyer and others, they will avoid criticism.

This is astoundingly irresponsible.

It is an abdication of responsibility by the Prime Minister, by his cabinet, by his lapdog backbenchers, by Erin O’Toole, by his lapdog MPs, by corporate executives, by media, and by anyone who says this is achievable.

These targets are not achievable.

Environment Canada released data earlier this month (Greenhouse gas emissions - Canada.ca) showing that 2019 saw emissions increase over the previous year. Measured against the 2005 baseline year, emissions had only decreased by 1%.

So, in 14 years emissions had been reduced by 1%. Not only that, but during these 14 years all kinds of coal plants were shut down – so the so-called “low-hanging fruit” of emissions reductions only helped enough to deliver 1% of decline!

Current commitments say we have to reduce emissions by another 29% below 2019 levels by 2030.

Simple math says that means reducing emissions at about 35 times as fast as we have reduced them so far. And remember – the reductions we made so far have cost a great deal of money – electricity rates in Ontario shot up on the back of coal-fired facility closings.

If your energy prices shoot up in an effort to deliver 1% reductions, how much more will they shoot up if you have to start going at 35 times the speed?

But wait - now the Prime Minister says we will “blow past” that target. He wants to be at a 45% reduction. That means going over 50 times as fast. There is a train wreck about to happen, and the PM just sped up the train.

We are in the midst of a dramatic lockdown. 2020 numbers aren’t out yet, but estimates are the lockdowns will have reduced emissions by 7% last year (Global carbon emissions down by record 7% in 2020).

Complete economic discord, massive social dislocation, and more – and only 7% in emission reductions. And now the Prime Minister says let’s get to 45% - that would mean making things 6 to 7 times worse.

Folks, this ain’t going to happen, and trying to make it happen is going to destroy our economy. Someone needs to stand up and say “stop the climate train wreck.”

Write to the Prime Minister, to your MP, your MPP/MLA/MNA. Call your utility or other energy provider. Ask them straight up: Tell me how much this is going to cost?

We need to stop this train before it wrecks the country.

Dan McTeague … is President of Canadians For Affordable Energy.