Economic recovery out of sight in Budget 2021 -- BC Liberals 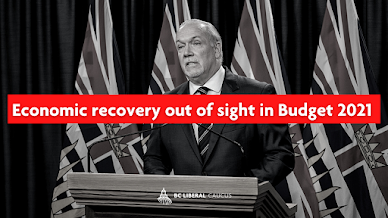 “British Columbians were looking for a shot of optimism that the NDP had a plan going forward, that individuals and small businesses who have struggled for the past year would get some help,” said Mike Bernier, BC Liberal Critic for Finance. “What we saw will be a disappointment to those people. There’s no plan for economic recovery, there’s still no jobs plan, and there’s nothing to make British Columbians feel hopeful about the future of this province as we move beyond COVID-19.”

While we are in the third wave of the pandemic:

“All you need to know about the NDP’s priorities is that the Minister of Jobs – the one in charge of economic recovery – saw his budget cut,” said Bernier. “The recovery grant funding is from last March, which illustrates just how incompetent they’ve been. They’ve abandoned their commitment to affordability. There’s no new support for individuals who are struggling to pay their bills, the $400 annual renters’ rebate has disappeared, and they’ve actually cut funding to school districts.”

“John Horgan has repeatedly said we’re all in this together, but this budget doesn’t deliver on that promise. The only plan seems to be an expansion of government services. It’s not a stretch to say Horgan and the NDP have blown it for all of us.”