FORSETH -- These malignant scums of society need to go from their palatial homes, to instead living a cold prison cell 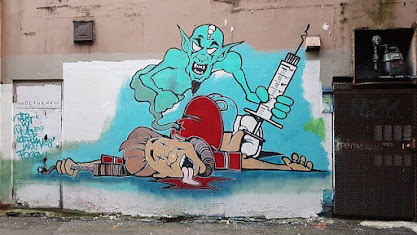 Yesterday, the tragedy of hundreds of lives lost due to drugs, addictions, and a poisoned drug supply was reported on once again – but was anyone listening?

Have we tuned out to the monthly reports of lives lost?

Month after month the BC Coroner’s Service announces the raw numbers of men and women ... husbands and wives ... brothers and sisters ... fathers and mothers ... that have been lost.  Immediately on the heels of that comes a statement from the Minister of Mental Health and Addictions, Sheila Malcolmson, declaring what a tragedy it is.

What follows are the last seven months worth of “talk” about the situation ... about how those lives are being mourned ... about the sorrow felt ... the heartbreaking loss ... about those grieving ... not allowing this tragedy to continue ...

Some of the most sick individuals in society are praying upon those suffering from the horrendous effects of addictions – and worse yet – they are poisoning the very drug supply they are feeding the addicted with. It’s murder, plan and simple, but the law and the courts allow them to get away with it.

It seems poisoning drug addicts is okay and allowed, but if an individual was to poison their spouse, say, well that would be a different story.

Why is that? As you read the following direct quotes from BC government media releases, ask yourself these two questions ... “Why is it allowed, why does it continue?”

And better yet ask yourself WHY we do not have the facilities needed – for immediate access – to help those suffering from addictions issues to be able to begin breaking the horrendous cycle they are on?

In March, 158 people lost their lives to a toxic illicit drug supply in B.C. It’s a heartbreaking loss, and we stand with everyone mourning the death of a loved one.


“Today, people in every community throughout the province hold sorrow in their hearts for loved ones lost, as we mark the sombre five-year anniversary of British Columbia’s overdose emergency. “As we grieve the more than 7,000 people who have died by overdose since the public health emergency began, we reaffirm that we cannot – and will not – allow this tragedy to continue.


“In February, we lost 155 people to a toxic illicit drug supply in B.C. They were taken too soon. It’s a heartbreaking loss.|


We lost 165 more family members, friends, co-workers and teammates in January as a result of the toxic illicit drug supply in B.C. This staggering number follows the deadliest year our province has ever experienced when it comes to the overdose crisis. This level of loss is hard to bear, and we mourn with everyone who has lost a loved one.

“In 2020, 1,716 people lost their lives to a toxic illicit drug supply in B.C. This overwhelming loss of life is felt deeply in every community, and we mourn with families, friends, co-workers and teammates who are grieving unbearably tragic loss.


Heartbreakingly, 153 people lost their lives in November due to a dramatically more toxic drug supply in B.C. These are our parents, children, friends and neighbours in communities across B.C.


“This is the fifth month this year with more than 160 suspected illicit drug deaths reported to the BC Coroners Service and more than double the number of people who died as a result of a toxic drug supply in October 2019,” said Lisa Lapointe, chief coroner.


In September 2020, there were 127 suspected illicit drug toxicity deaths. This represents a 112% increase over the number of deaths in September 2019

Those raking in blood money from creating a poison drug supply need to know that this will no longer be allowed to continue.

These malignant scums of society need to go from their palatial homes, to instead living a cold prison cell.

It’s time – no it’s well past time – to actually do something about this.

Image by Alan Arsenault from Pixabay