Students in every province recorded declining results in international math tests from 2003 to 2018, finds a new study released today by the Fraser Institute, an independent, non-partisan, Canadian public policy think-tank. 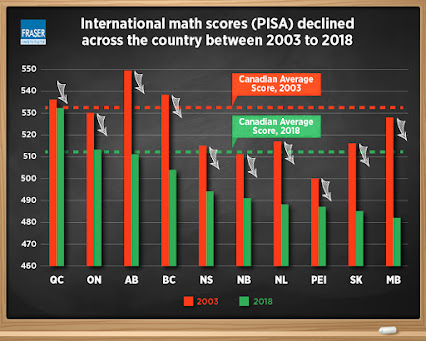 “Mathematics holds a position of strategic importance in the school curriculum, especially in our increasingly digital world, which makes these signs of declining math performance by Canadian students all the more worrisome,” said Derek Allison, professor Emeritus at the University of Western Ontario, a Fraser Institute senior fellow and co-author of Math Performance in Canada.

Conducted every three years, the Programme for International Student Assessment (PISA)is the most extensive and widely accepted measure of academic proficiency among lower secondary school students around the world. Analyzing PISA data over the most recent 15-year period, the study finds that Canada overall fell from fifth highest score among the 37 participant countries in 2003 to 12th place among the 78 participating jurisdictions in the most recent 2018 assessment.

Crucially, PISA scores declined in every province over that period. Declines were steepest in Manitoba with a decrease of 8.7 per cent, followed by Alberta (6.9per cent), and British Columbia (6.3per cent), and least severe in Prince Edward Island (2.6per cent) and Ontario (3.2per cent), with only a small non-statistically significant drop in Quebec’s scores (0.7per cent).

“By almost every measure, math scores are declining across the country,” said Vincent Geloso, a senior fellow at the Fraser Institute and co-author of the study.

“Policymakers and educators need to understand the severity of these declining math results and should seriously consider ways to reverse the trend.”