Conservative BC leader tells Premier Horgan, ‘I’ll even pay for your flights, and tour you personally, if you will find the time in your schedules’ 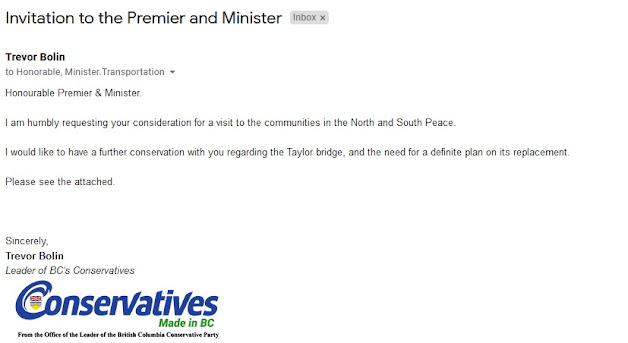 With news of yet another inspection of the Taylor Bridge, Conservative BC leader Trevor Bolin is asking, “How many inspections does a bridge need when the recommendation was clear this crossing needed to be replaced a long time ago?

I live, work, and play in the Peace River, and there are few here who will argue that the Taylor Bridge is long overdue for replacement – NOT, yet another inspection.”

Bolin, a four-term city councillor in Ft. St. John went on to say, “For well over a decade the Provincial Government and its ministries have known there was a need to replace the bridge joining Peace River North and Peace River.  Yes, it’s going to be extremely costly and yes, it’s going to cause issues with travellers, and even delays with supply chains, but those costs won’t be nearly as high as a collapse of the bridge as happened in 1957.

To repeat what the Conservatives of BC pointed out this past January, when the Taylor Bridge was built in 1960:

The BC Liberals under their majority mandate failed to properly plan for and carry out a second crossing, as originally proposed during preparation for the Site C hydro dam. In the meantime, since coming to power in 2017, the NDP have continued the long-standing policy of ignoring the North, and its hard-working families, which are essential to our province’s gross domestic product (GDP).

This afternoon I invited Premier John Horgan, and Transportation Minister Rob Fleming, to visit the communities of Taylor, Fort St John and Dawson Creek to get a firsthand look and hear from the people of the Peace River region on the importance of this bridge.”

“Honourable Premier, I’ll even pay for your flights, and tour you personally, if you will find the time in your schedule.” BC’s Conservative Leader Trevor Bolin concluded.

NOTE: BC’s Conservative spoke out on the Taylor Bridge issue on January 8th (Is it too much to ask that a pittance of the billions spent on BC roads be allocated to the Peace River region?)