FELDSTED -- Trudeau’s claim to be a feminist is fraudulent. He is not capable of empathy or sympathy 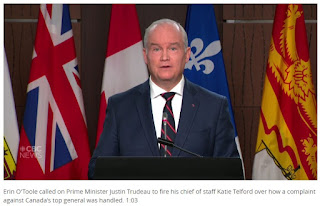 Watching Justin Trudeau and his entourage in action is like watching reruns of Hogan’s Heroes. At the first sign of (another) scandal, Trudeau or a minion appears in the role of Sargent Schultz, claiming: “I know nothing!”

The federal Conservatives laid down a political marker today by calling on the prime minister to fire his top adviser over how his government handled the sexual misconduct crisis in the military.

Opposition leader Erin O’Toole said today his party has put a motion before the House of Commons — to be debated tomorrow — that calls for the dismissal of Katie Telford, the prime minister’s chief of staff.

It’s the latest twist in a crisis that erupted three months ago, when allegations of inappropriate behaviour involving the country’s former top military commander — now-retired general Jonathan Vance — were published in the media.

An allegation of misconduct involving Vance was flagged to the Prime Minister’s Office and the Privy Council Office in early 2018.

Prime Minister Justin Trudeau has said that while his staff had been aware of the 2018 allegation, he was not privy to the details until the reports surfaced publicly. More recently, he said that Telford was not aware that it was a “#MeToo” allegation.

We are to believe that when an allegation of misbehaviour by the head of the armed forces was raised to the Privy Council and Prime Minister’s Office, no one at those nose-bleed levels asked what the allegations involved. That indicates either gross negligence or collusion. There are no other choices.

This government condones sexual abuse. Whether it is the military, RCMP, another department or agency, sexual misconduct is shrugged off. Power imbalances are ignored.

Forget the back-bencher thrown out of the caucus without investigation, an impartial hearing or an opportunity to defend himself because the PM wants to show how quickly he deals with misconduct allegations when his appointees are not involved.

Thousands of females in the military, police and other civil service ranks tell us that they have no recourse for the abuse they suffer. They speak truth to power, and the Prime Minister’s credibility was shattered long ago.

Equality demands clear rules of engagement. Our society has finally (although grudgingly) admitted that women can be effective in every employment category but failed to address the cultural changes required for integration. Those in charge assumed the necessary changes would take place naturally, which has proven to be wrong. We need to correct the culture, not ignore it.

We need to develop explicit rules for dealing with sexual exploitation and misconduct that recognize that both sexes can breach those rules. We need an independent investigative service with the power to obtain search warrants and to refer cases to crown prosecutors for action.

Trudeau’s claim to be a feminist is fraudulent. He is not capable of empathy or sympathy. He was caught harassing a female reporter and elbowing a female MP in the House when he lost his temper and physically tried to move members to their seats. His treatment of Jody Wilson Raybould and Jane Philpott was despicable. He was caught squarely in wrong-doing and abused his powers to retaliate.

We must do better to heal our nation and society. That requires leadership, ethics and principles absent in this government. Those who will abuse their power to promise you anything you want will eventually use that power to take everything you have.