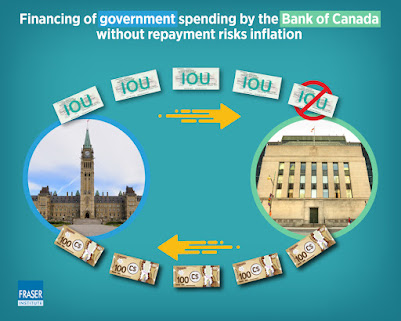 The idea that the Bank of Canada can continue to finance government debt by printing money without a clear commitment to repayment, known as Modern Monetary Theory (MMT), poses enormous risks to the Canadian economy, finds a new study released today by the Fraser Institute, an independent, non-partisan, Canadian public policy think-tank.

“Modern monetary theory is a pipe dream, and if the federal government and Bank of Canada go down this road, the damage to the Canadian economy could be substantial,” said Steven Globerman, resident scholar at the Fraser Institute and author of A Primer on Modern Monetary Theory.

Advocates of MMT assert that a government that issues its own currency (like Canada and the United States, among others) cannot default on debt issued in its sovereign currency because it has the power to print as much currency as needed to pay off the public debt.

If the Bank of Canada does not require the government to repay that debt once it matures, Quantitative Easing will have evolved into MMT.

“The Bank of Canada is facing an imminent test of its credibility and independence over the coming months,” commented Globerman.

Crucially, where MMT has been tried in the past, it has resulted in inflation, sometimes even hyper-inflation, with devastating consequences for domestic economies.

In particular, the implementation of MMT in Latin America and Greece resulted in runaway inflation and a significant decline in standards of living.”

The arguments for MMT are really arguments for much higher levels of government spending financed by borrowing provided by the central banks, which has failed everywhere it’s been tried” Globerman said.