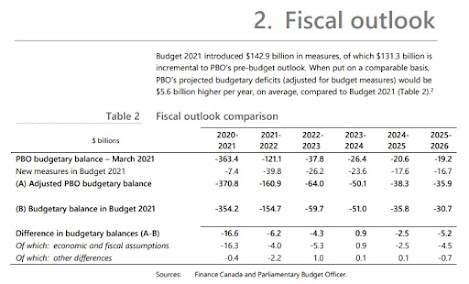 And would you believe it?

Just weeks after the budget was delivered the deficit for the federal government, over the next five years, will be to be even higher than the government projected.

Of course, who is surprised?

Only those who tag the federal Liberal line espouses anything different. And, of course, all these projections are really guesses — who really knows?

The economy is a huge machine with many moving parts, many involving subjective decisions made by people. Economists have been saying this since the great Adam Smith, but governments continue to exaggerate and hence are almost always wrong.

For example, the next three years, perhaps the only timeline that is realistic, the deficit is up $27 billion.

So, when you hear governments tout jobs and so called investments, and boasting containing the deficit (balanced budget seem to be lost words) take it all with a few grains of salt. Even the governments own fake numbers still have us with a deficit at the end of five years.

Go into the Parliamentary Budget Officers website and you can read the 19-page update for yourself. CLICK HERE

Brian Peckford … was Premier of Newfoundland and Labrador from 1979 to 1989. Since 1993, he and his wife Carol have made British Columbia their home; they now live in Parksville, on Vancouver Island. He blogs at Peckford 42.