FORSETH - As increased automation has hit forest and resource industries, tens of thousands of jobs have been shed, which we will never see again. 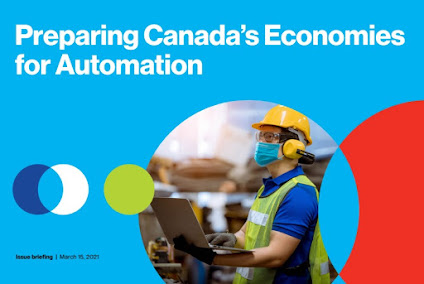 Earlier this Spring, the Conference Board of Canada released a report entitled, “Preparing Canada’s Economies for Automation” ...

Then, one week ago, the Conference Board advised it’s subscribers that, “
Since its release in March, our Automation Vulnerability Index (AVI) tool has been used by hundreds of policy-makers in preparation for the technological changes to come.”

So ... here’s my question ... is it being used by the provincial government, and being taken note of by the political parties creating policies, which should be for the betterment of British Columbia and it’s residents?

One of the biggest concerns, which I noted from reading the report, are that:

I added the italics in the two points noted above, which if you live in BC, should be a BIG concern.

As more and more automation has hit our forestry and resource industries, tens of thousands of jobs have been shed – and there is no way we’ll ever see those numbers brought back.

The handful of major forestry companies in BC have all outright closed operations in many of the smaller communities.

Within an hours drive in any direction from where I live in Kamloops, we’ve seen mills close in Merritt, Kamloops, and the North Thompson. The same has happened down the road in Kelowna and many areas of the Okanagan ... in the Cariboo where I once lived ... and in northern BC. Instead of supporting jobs in small-town BC, these companies have instead trucked timber resources from those communities, into larger centrally located mills.

And according to the Conference Board report, that will only continue, as “employment declines in occupations that involve routine tasks” ... and ... “local economies with a high concentration of high-risk, low-mobility occupations will likely see more job loses, demographic change, and industry restructuring.”

For small-town BC that is a double-edged sword. Few if any new jobs are being created, and the lack of new jobs is furthering endangering fragile local economies, leading to the local grocery store, restaurants, and other businesses closing ... as well as schools and hospitals.

“Placing automation in the context of other ongoing labour market trends highlights additional vulnerabilities that regional economies will likely face as companies and industries adopt new automation-enabling technologies. Knowing the type and amount of employment at risk of automation, and the economic costs associated with potential transitions to less vulnerable occupations, could help policy-makers better prepare for technological change.”

~~ Conference Board of Canada, Preparing Canada’s Economies for Automation 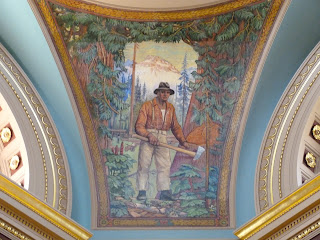 While I have not changed my opinion on the need for BC governments to actively support the kinds of high-paying economy building jobs that come about from forestry and resource industries, expanding past what the Conference Board of Canada is calling ‘high-risk, low-mobility’ (HRLM), must be a major focus at all levels of government.

Consider these facts, from the Conference Board report, with regards to Western Canada:

... the labour force in occupations with limited job openings is 67.5%

... nearly 40% of the labour force has only a high school diploma or less

This is purely speculation on my part, however it seems the higher cost would be due to the fact we are looking at generally an older population, with perhaps less advanced education, requiring refreshers in some basic education areas before going on to training in possible new fields of employment.

The mystery for me in reading this report was that while briefly mentioning the tourism sector would be one impacted, there really was no information as to why, and how that would be; hopefully this will be something investigated further in the weeks and months ahead.

The policies of government, and the political parties of those who would seek our vote, can’t ignore the information in this report because if they do, we are headed for economic disaster.

And as a friend of mine stated to me after he himself read this report, ‘Everyone else is focused on the next day, we need leadership and foresight in this province.’

Is government ready to lead?  I certainly hope so.