NEXT DOOR IN ALBERTA … 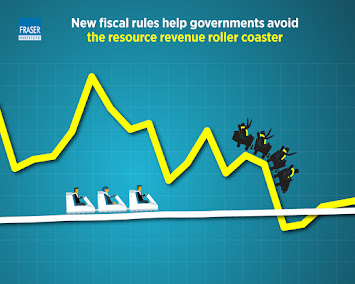 Alberta’s budget deficits and mounting debt are, in part, due to its treatment of non-renewable resource revenues, but establishing new constitutional rules requiring a portion of resource revenues be saved would help stabilize provincial finances, finds a new study released today by the Fraser Institute, an independent, non-partisan, Canadian public policy think-tank.

“It’s time the Alberta government introduced rules to stabilize this volatile source of revenue and stop the boom-and-bust cycle in government finances,” said Tegan Hill, economist at the Fraser Institute and co-author of A New (Old) Fiscal Rule for Non-Renewable Resource Revenue in Alberta.

This volatility has fueled instability in the budget, particularly as the provincial government increased spending to unsustainable levels during periods of relatively high non-renewable resource revenue.

The second recommendation is for the province to reinstitute the rule that requires a portion of non-renewable resource revenues be deposited into the Heritage Fund.

Crucially, these rules should be engrained constitutionally so that it is more difficult for future governments to change or simply ignore the rules when finances are tight.

“New rules based on the past experiences of the province—and not easily undone by future governments—that establish a predictable level of non-renewable resource revenue for the province’s budgets would help put an end to the boom-and-bust cycle in Alberta’s finances,” said Jason Clemens, executive vice-president of the Fraser Institute and study co-author.