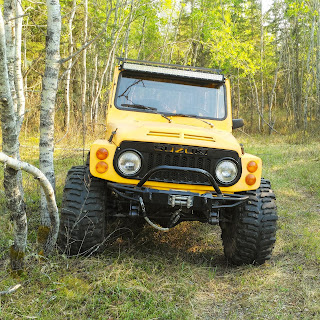 Did you know that racism is just one of the things that gets handed down from generation to generation? It sounds crazy, doesn't it? But it isn't a visible thing.

You see this old Suzuki of mine? I love to tinker with things like this in my spare time. So many people ask me how in the world I learned so much about wrenching on vehicles.

Just like I learned about the forest and the water and the plants from my grandpa, and my amazing mum, I also learned practical skills like mechanics and wiring and plumbing from my dad. Someday when I pass along, my kids will get what vehicles I have left.

I am telling you this and using that old 4X4 as an example because we can all see that mellow yellow beast! We can touch it, and drive it, and smile when we shift through the gears. It's a three-dimensional, physical hunk of iron.

But racism is not three dimensional. Racism isn't something that everyone can see because it is parked in my yard. Just like the traditional knowledge that my Elders passed down to me, the mechanical skills I have were all "single dimension", and invisible.

My parents were so busy teaching me about the importance of being resourceful, that they never taught me how to hate others because of their race, their gender, or their religion. When something like racism remains invisible, it is hard to understand how to deal with it.

I keep bouncing back to the old yellow station wagon because if someone said, "you really need to get rid of that thing, it's an eyesore." ... I could deal with it. I could sell it, or trade it for something, or even hide it on the reserve and nobody would be the wiser.

We would all forget it was there. But what about racism?

I hear these terms like "systemic" or “systematic racism” thrown about by the mainstream media lately. And people look to me to suggest ways of reducing it.

I hate to come right out and say this, but what we are dealing with today is intergenerational bigotry that has been handed down from grandfathers to fathers, and sons to sons and daughters.

It didn't happen over night! People didn't just wake up and become hateful of their neighbors. They had to be taught these traits.

I am from a large family. Out of fifty or more cousins, uncles and aunts, only a couple were racists. I can remember the way one of them would get into fights with the police all the time. I remember the way that person would talk about white people, and the way he was always trying to pick fights with innocent folks, just so he could call them racist if they fought back.

But my parents (and many of you know how badly abused my poor mom was when she went to St Mary's in Mission BC) would tell us kids that there was no benefit to being unreasonable. Yelling and screaming obscenities at people was not the way to move forward with our lives, so we never did it. We learned to look at people for the value they brought to the relationship instead of what their race or nationality was.

Because Intergenerational racism took years and years to develop, it will also take generations to have it fade away. In all honesty, it will never go away completely.

What we need is a government and a mainstream media who will stop telling everyone that our country is racist. It is a well-known fact that if you hear something over and over and over again, even if it is not true, you begin to believe it. So, the Media telling us that Canada is racist, and that all violent crimes are racially motivated, places that thought into our heads.

If they took the time to break out the root causes of racism in the first place; that would be a great beginning. And if they were to study violent crime to ascertain its root cause, or causes, they could overlay the two components, and see where they intersect.

What the heck ... they study everything else! Why not do an in-depth analysis of what is causing violent crimes, and what is causing racism. Disseminate that information, and deal with each component individually. But for crying out loud, stop trying to make every Canadian feel guilty about racially motivated injustice!

I have thousands of friends on my social media platforms. I can guarantee that if I asked every one of them who was racist to step forward, there wouldn't be very many. I mean seriously, how could they be racist and still put up with me?

I am so Indian that any racist would never even consider being my friend. But look at the way I get thousands of shares and likes when I make a post??!! Racist people would not be so darn nice.

Racism in Canada is still a very significant problem, but like I have said before, only the government and the media think that all racists are white people.

All the rest of us can take a few seconds to look left, and then look to the right. Did you see any racists?

If you did, then tell them to put a stop to their behaviour; it isn't very attractive. In fact, being racist is ugly right from the heart. Being a racist nowadays is so backwards thinking. Stop it.

The problem is that I only have a few thousand friends to tell this to.

Those of us who want racism to stop, need to speak out against it. We need to let people know that it is not nice to be racist. Just like that old yellow 4x4 had to be gotten rid of, so does racism.

A couple of really cool guys came and bought mellow yellow from me ... so it is gone now. Who is going to help me get rid of racism next? It's easy to do.

Just refuse to judge others by their skin color or nationality, and if you see or hear someone doing it, tell than that we Canadians don't need that anymore.

Tell them that the government and media is all fake news and that our country is not nearly as divided as Trudeau would like us to believe.

I love you guys!

I am one of the last of my generation to have actually attended residential and Indian day schools. I have lived on and off reserve and have seen the benefits and the hardships of my people in both situations.