NDP admit their housing plan is a resounding failure

As the cost of housing in British Columbia continues to soar to new heights, the BC Liberals are renewing their calls for the NDP to focus on increasing housing supply — something the Housing Minister has only recently conceded is critical to improving affordability. 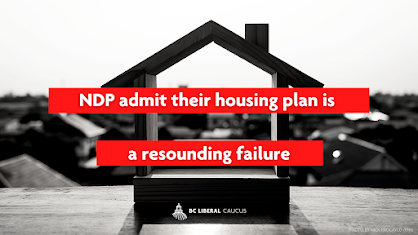 “After more than half a decade of blaming B.C.’s housing crisis on speculators, Attorney General and Minister Responsible for Housing David Eby has finally begun to acknowledge the need to get serious about increasing housing supply,” said Ben Stewart, BC Liberal Critic for Housing.

“We have been sounding the alarm on this for years, but the NDP were too busy scapegoating and blaming everyone but themselves for the problem, wasting precious time that could have been used to fast-track the construction of housing that is desperately needed in B.C. We need to see a massive investment in building new homes in this province — from affordable rental units, to new homes for sale — but unfortunately, the NDP has built less than 5 per cent of the housing units they promised in their 10-year plan.”

In 2017, the NDP promised to build 114,000 new homes over ten years. Four years later, only 5,269 units have been completed, and 1,109 of those were first announced by the previous BC Liberal government.

In the current market, the National Bank reports it would take 34 years to save for a down payment on a home in Vancouver and renters are paying $2,532 more per year under the NDP versus 2017. Meanwhile, inflation was up 3.9 per cent year over year in December, marking six straight months of elevated inflation above 3 per cent.

“The NDP has spent years talking while taking no real action on housing affordability — and it’s gotten worse under their watch. They chose instead to levy new and higher taxes that have actually contributed to declines in available housing, and broke their promise of a $400 renters’ annual rebate that would have provided relief to families,” said Mike Bernier, BC Liberal Critic for Finance.

“Like the minister himself recently said, new taxes are not going to put a roof over the head of someone in need, what’s needed is to actually build homes. I sincerely hope we are going to see a shift in NDP policy, but I’m not getting my hopes up. Four years under ​the NDP has only produced higher rents, increased unaffordability, and record low levels of housing supply. We need real action to get affordable housing built in this province, but that has yet to be seen under this NDP government.”

The NDP twice promised voters a $400 annual renters’ rebate, first in 2017 and again in 2020. As of today, people are still waiting for that relief.