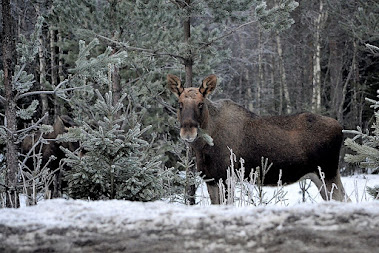 From the viewpoint of what could be called the Publisher of this blog-site, I thought it was worth sharing this post from Stop The Spray BC -- especially given declines of the Moose populations in a number of areas of the province. It is certainly a strong possibility that the spraying of broad-leaf trees, a main source of food for moose, could strongly be impacting their food supply.

There is an interesting chart from the Swedish moose-diet study posted last week that showed the healthiest, heaviest moose were the ones that had a "broadleaf diet."

The authors noted that it was counterintuitive because the Scots Pine (pinus sylvestrus) and the Norway Spruce (picea abies) (that are edible to Scandinavian moose) both had pretty high protein. Scots Pine in fact had the highest crude protein (CP) of the lot. They also both had a lot of carbohydrates (TNC), with Norway Spruce having the most.

So why did they do worse on conifer?

The authors speculate that conifers can contain "different and often higher concentrations of digestion inhibitors (mainly terpenoids but also phenolics) than deciduous browse (which mainly have phenolics, in lower concentrations)"

Think turpentine. Most conifer is infused with it, oozes it in it's sticky sap. Deciduous has no turpentine-producing resin.

The guts of ruminants are highly complex. They depend a lot on a healthy microbiome (which glyphosate can interrupt). They need the proper balance of fibre along with carbohydrates and protein to keep the bacteria ticking. Moose are especially finicky and captive moose fed hay and grass do not do well. They need lignin and cellulose. And the bitter, turpentine-infused needles of the conifer probably don't do the gut bacteria any favours. 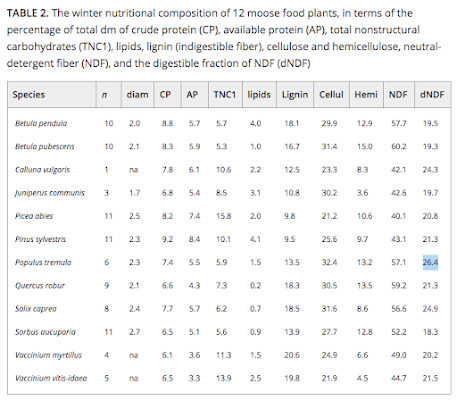 Perhaps this balance is highlighted in this chart.

The highest dNDF values (basically the digestible portion of the fibre, which would include carbohydrates along with other compounds), was in the Aspen (the highest) and the willow (salix) (second highest). The two species that moose coincidentally seek the most. You could also look at the cellulose content. The species with the most cellulose are the aspen, the willow, the birch, along with the common juniper. For hemicellulose, again, the deciduous browse offered the highest values.

Whatever is going on, and it probably has to do with the ratios of protein to fibre to carbohydrates, the fact remains the moose preferred deciduous browse and they did the best on it.

"The results from this study suggest that the nutritional composition of the twigs of these broadleaved tree species (Figure 4) likely contributes to this high degree of selection, as it resembles the identified protein:TNC balance targeted by captive moose"

There ya have it.

Stop The Spray BC ... calls on politicians to take action to stop spraying herbicides on public forests to take out fire-resistant deciduous species that support wildlife, have economic value, diversify our forests, and make them more resilient to future changes.